The full in bloom interview with Judas Priest co-founder / guitarist K.K. Downing is now available.  LISTEN TO THE ENTIRE INTERVIEW VIA THE CLIP ABOVE OR ON YOUTUBE.

An excerpt taken from the beginning of our interview has been transcribed below.  You can listen to the entire interview via the embedded YouTube clip above or at this location.  Check back for more video / transcribed excerpts from this interview. 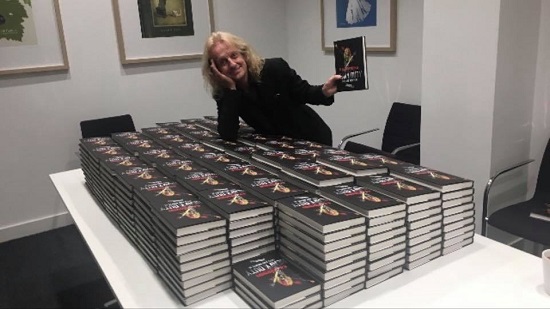 full in bloom:  What’s a typical day like for you nowadays? 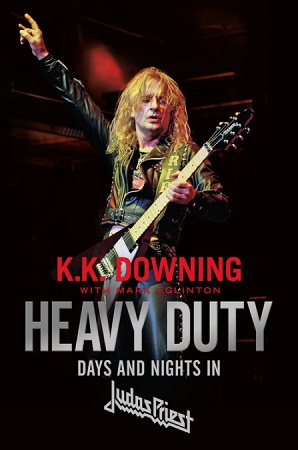 full in bloom:  I saw that you had auctioned off a couple of your iconic guitars.

K.K.:  I’m into the zone now the last few years where I don’t feel that, probably like a lot of other people, that time is not necessarily on my side.  I say that because I’m 67 years old and I’m going to be 68, so I’m kind of pushing 70 and that’s kind of getting up there.  I guess you get to be a bit nervous, I suppose.  Obviously, losing good friends along the way, and things that are happening seemingly on a, not necessarily on a daily but a weekly basis, you know, we’re losing people, obviously.  A good mate Lemmy (Kilmister) is gone, a good mate Ronnie just before him went, Ronnie Dio, and lots of things happen.  We just lost Vinnie Paul, a good mate.  We go back together, obviously, with Pantera doing tours with us….and my good buddy Jeff “Mantas” (Dunn) from Venom.  He actually died towards the end of last year on the operating table, but they brought him back.  Jeff is out there gigging again.  I’m not saying I’m going to pop the clogs at any point.  But coming back to the guitars, whatever you got.  You find yourself doing things that probably are best not spoken about, but lots of people do it.  Does it make sense to start making your own funeral arrangements or do you have to put the burden on your family?  So things like that, you enter the zone and I found myself owning a lot of things, a lot of stuff that had no value and I’m thinking to myself, ‘is it a burden if something suddenly happens?’  It’s kind of me getting my house in order, if you know what I mean.

full in bloom:  Sure.

K.K.:  So not to put the burden on my family, if suddenly I got ran over by a car or had a sudden massive heart attack or something, then I think it’s better to probably, as I said, get the house in order.  I don’t want my family to argue or to decide whether to sell things off or not to sell things off because they would think that I wouldn’t want it or I would want it.  I’ve put myself in a position where all of these things that happen to me, that I’m going to make my own decisions about what to do.  So basically I found myself with an awful lot of guitars and a lot of ones that I don’t use and wouldn’t use anymore.  If I go back out on tour or record again, so obviously those guitars that I would use are still here, close by me.  But the other ones that were basically surplus to requirements had a very good value, it’s better for me to….basically it’s like stocks and shares and stuff like that.  Time to cash it in, so it becomes liquid cash that you can actually put in an inheritance package for your family if something should happen.  So that’s kind of me just taking care of business, really. 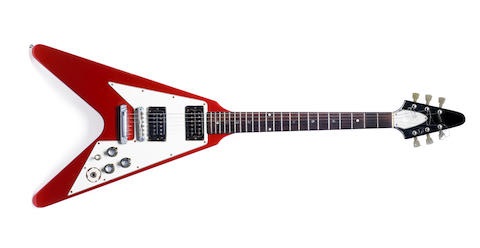 full in bloom:  I think on the (auction) site they estimated it to be around 10 to 20 thousand dollars.

K.K.:  Yeah, I think that’s probably just to get a massive audience.  I don’t know how it works, myself.  Obviously that was a 1967 Flying V and Gibson only made 111 of those guitars, and those guitars were put in some pretty famous hands, to be fair.  I don’t know everyone that had one…I know Dave Davies from The Kinks had one.  I know Jimi Hendrix had one.  I know that Andy Powell from Wishbone Ash had one, still plays that guitar, he does.  I know that Marc Bolan had one. I know that Keith (Richards) from the Rolling Stones had one.  I do know where a lot more went, but there wasn’t that many to go around.  Obviously I got my hands on one.  Obviously the Schenkers had a couple.  So they were bound to have been worth more than 20….I was offered $25,000 more than 20 years ago, cash there and then by a guy that went to a concert.  That guitar was used on a lot of stuff, a lot of concerts.  It was my flagship guitar, for sure.  But I retired that guitar a long time ago because it was getting too valuable.  So I’d never take it out on the road, and now I’m using scalloped frets and all of that sort of stuff.  So, nice to pick up now and then but really there’s not a great value in that.  I’ve still got some very, very nice and some very valuable guitars. 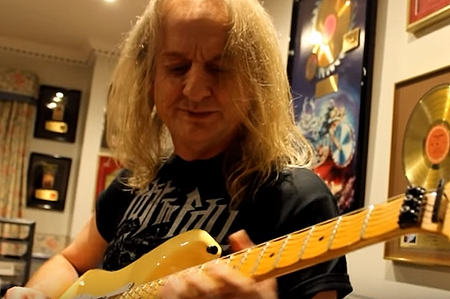 full in bloom:  You use the scalloped neck now, huh?

K.K.:  Yeah, yeah.  Every guitar I’ve had since then has got scalloped frets.

full in bloom:  What would you say is the benefit of that?  I have played on them before but it almost seems like it’s harder or something.

K.K.:  Yeah, but if you’re a little guy like me, not very strong hands and all that, then scalloped frets can really help.  I use light gauge strings but it still takes a bit of pushing, here and there, really.  Especially if you want to get those tone and half bends in.  In particular, the main reason, especially when you still have got soft skin…I used to get calluses on my fingertips but I don’t really get calluses anymore because you’re using light gauge strings and scalloped frets.  I find I can make those bends a lot easier, because, the thing is, you get fingertip friction and that’s why a lot of guys went to jumbo frets, you know, to get less finger friction.  There’s not that much friction with the finger and the fretboard, so that does help.  You can get your finger more sideways on the string when you’re bending, when you push it, as opposed to having to push down and then laterally.  So, it’s just one of those things.  Once I tried it, I just liked it and never went back.  Way back we’d still play hot and sweaty clubs and so doing those bends just became a lot easier with scalloped frets, really….a bit more reassuring.

full in bloom:  In the book you talked about how Les Binks (ex-Judas Priest drummer) had done the double bass on “Exciter” and I think everybody kind of points to that “Overkill” song by Motörhead being that foundation of thrash with the double kick.  I found that interesting that “Exciter” came out in 1978 and “Overkill” came out in 1979.

full in bloom:  There wasn’t another case of that, right?

K.K.:  No, I don’t think so.  Les was pretty innovative and obviously a very good drummer. 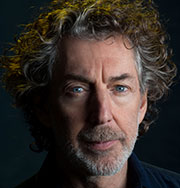 full in bloom:  Simon Phillips came in after Les quit, which I didn’t even realize until I read your book.  If he would have wanted to join was there a possibility he could have been in the band?

K.K.:  Yeah, we asked him but he was just enjoying his life as a top session guy, really….and he probably thought that going on the road with Judas Priest was a bit risky (laughs).  You know the stories you hear about rock n’ roll bands, smashing up hotel rooms and all of the crazy antics.  Simon was a great drummer but he was a pretty clean cut lad at the time.  I think he had his birthday in the studio.  I’m not sure how old he was.  I can’t remember if I said in my book if he was 21 or was he 18?  He was young, anyway. 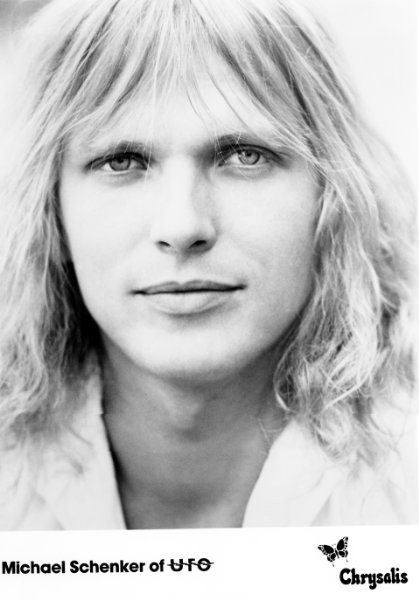 full in bloom:  In your book you talk about a Hell’s Angels story involving UFO and how you were friends with Michael Schenker.  He always seems like such a reserved guy.  What was that friendship like?

K.K.:  It was more of a professional friendship, I think really.  I think that we had a lot in common for some reason, probably because of his association with UFO.  I mean back in the early days, I think UFO and Scorpions were my favorite bands and I hope that Priest was one of their favorite bands.  I think in that genre of music, Priest, Scorpions and UFO were probably in a niche together, really, in a certain way, if that makes any sense.  Obviously, me playing the Flying Vs and Michael playing the Flying Vs and, you know, I got to know all of the guys well in the Scorpions….really quite well.  I spent a lot of time living down there in Spain in Costa del Sol and their father lived down there, you know, Michael and Rudolf’s father.  He lived down there with a lady and they asked me to take him some gifts one day, because they didn’t know exactly where he was, but I managed to find out where he was…..and they have a sister, Barbara.  Michael used to always get on my case because he wanted that ’67 Flying V (laughs) and I think I bought it the day before he came up from London to buy that guitar.  The guys told him ‘ahhh, Ken Downing of Judas Priest bought it yesterday.’  He never forgave me for that and he certainly won’t now if he knows he pitched 200 grand (laughs).  But every time we meet up…..Michael did ask me to join the Scorpions at one point in Los Angeles.  He also asked quite a few other guitar players.

full in bloom:  What year was that?

full in bloom:  Wow.  Did you consider it at all?

K.K.:  No.  Michael came to a show at the Whisky (a Go Go) on Sunset Strip and we had just played 5 shows in 3 days, and so we were doing well, you know….and I was happy.  Otherwise, I would have gone.  But I felt that Priest were probably going to do better than the Scorpions.  It was a good idea to weaken Priest and strengthen the Scorpions (laughs).   I guess we were pretty big rivals, really, the Scorpions and Priest.  Well, you know, in a healthy way.  Yeah, Uli left and they asked Michael to look out for a guitar player and I guess I fit the bill because Uli, we were kind of similar players in a way, I suppose, me and Uli back then with whammy bar stuff and being what some people would call ‘sons of Hendrix,’ which Uli certainly was….and  a great player.  I was very flattered, really, because Uli was an excellent guitar player.

full in bloom:  What was Pete Way like at that time?

K.K.:  Pete was quite an amazing guy….but they were pretty reckless, those guys were, UFO….and I guess Michael found that hard to come to terms with, really.  They really lived the (laughs) rock n’ roll lifestyle.  It was pretty crazy stuff.

There is a lot more interview left.  We still talk about the 1979 AC/DC-Judas Priest tour, Bon Scott, Iron Maiden, British Steel, Screaming for Vengeance and more Judas Priest.  You can listen to the entire interview via the embedded YouTube below, directly on YouTube at this location, or the Soundcloud widget below.