Dope Lemon, the performance pseudonym of Australian singer-songwriter Angus Stone (Angus & Julia Stone), just announced several live dates.   Beginning on July 12th, Dope Lemon will be at the Beach Road Hotel in Bondi Australia.  The dates wrap up at the Slendour in the Grass Festival in North Byron Parklands, Australia. A complete list of dates can be found below.

What began as laid-back jam sessions eventually turned into the debut album, Honey Bones. Prior collaborators Rohin Brown (the Walking Who), Elliott Hammond (the Delta Riggs), Matt Johnson and Rob Calder, are among those who appear on the debut, which arrived via Universal in 2016.

In an interview with The Saturday Paper, Stone described how the sessions began to take shape, “We’d just walk in after a few drinks and we’d just play, you know, stoned, and start strumming a chord over and over again, and someone would sit down at the piano and someone would sit down at the drums and they’d just be really long recordings… People were changing instruments. Lots of walking around and talking.” Later, Stone and his engineers would listen back and choose the best sections of the jams to rework into song arrangements. “We pick it apart and sometimes you’ll be lucky and get a whole stretch of a song in one take and it’s great. And on certain days we were a lot more focused and we’d go, ‘Okay, that last take was good, let’s try this.’ ”

When pressed about how much of a role weed played in the album’s creative process, Stone was quick to point out that surfing and sharing a bottle of wine also factored into the equation. “I don’t smoke much anymore. When you’re in the studio and someone’s rolling a joint, it’s like, if everyone’s in the same pocket, you get in there and you can definitely float along in a bubble when you’re jamming.  You can kind of lose yourself – I mean, you can lose yourself in music anyway, that’s a given… But it doesn’t mean that [dope is] everything. It’s just like, whatever: if it’s there, it’s cool.”

Heavy Bones was released on June 10. 2016 and climbed to number 11 on the ARIA Charts. You can listen to the title track via the embedded clip above. Personally, I love the song. I initially listened to it without watching the official video and later watched the video and somehow it completely changed the song for me. Who knew?

On the Angus & Julia Stone front, the siblings have reunited and just announced their upcoming album, Snow.  You can listen the first single at this location. 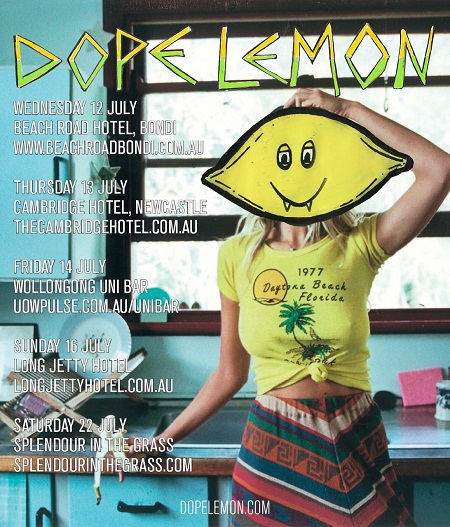 Saturday 22 July
Slendour in the Grass