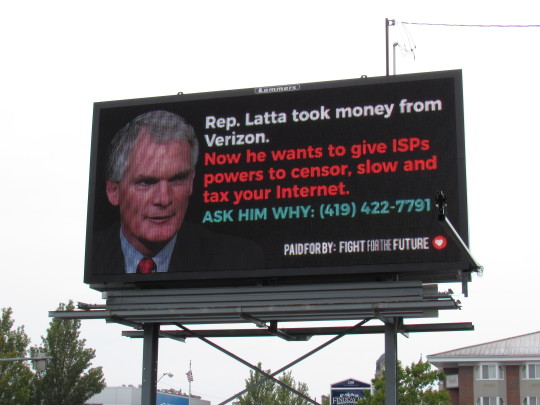 Today digital rights organization Fight for the Future unveiled 3 more crowdfunded billboards targeting Representatives Cathy McMorris Rodgers, Bob Latta, and Greg Walden, members of Congress who have publicly supported the FCC’s efforts to gut net neutrality protections that keep the web free from censorship, throttling, and extra fees. The three new billboards are the latest in an ongoing campaign focused on lawmakers who oppose Internet freedom. Earlier this month the group launched an initial round of net neutrality billboards targeting six different lawmakers in states across the country.

The move comes just hours before the FCC’s final deadline for public input on their controversial plan to repeal net neutrality. With lawmakers still in their home districts, the billboards – paid for by hundreds of small donations – appear in three different states.

Since the massive July 12th day of action, millions have contacted their representatives – who have oversight over the FCC – to ensure these key protections are not changed or removed. The billboards send a strong message to any Members of Congress contemplating support for the FCC’s plan to repeal net neutrality, which is currently being tracked through a “congressional scorecard” on BattleForTheNet.com. So far very few lawmakers have been willing to publicly support Ajit Pai’s plan, likely in light of polling that shows voters – including Republicans – overwhelmingly oppose it. 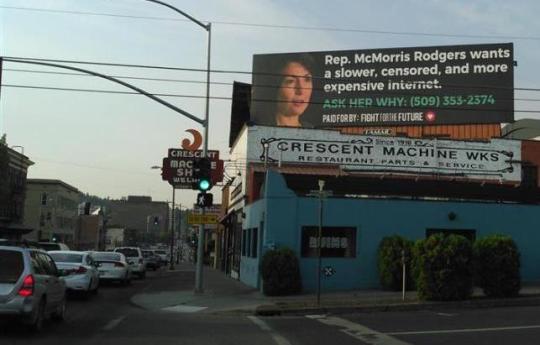 The outdoor ads feature some of the few members of Congress who came out with early support for FCC’s plan to repeal net neutrality rules, including:

“It doesn’t matter which party you’re in, or how charming you are on TV – if you attack net neutrality and Internet freedom we will make sure everyone knows that you’re corrupt to the core” said Evan Greer, campaign director of Fight for the Future (pronouns: she/hers), “every member of Congress should take note: supporting the FCC’s plan to allow censorship, throttling, and price gouging may get you a few extra campaign donations from big telecom companies, but it will infuriate your constituents, and will come with a serious political cost.”

The billboards highlight the increasing scrutiny on Congress – who have important oversight authority over the FCC. With no viable legislation on the table, net neutrality supporters remain opposed to any attempt at legislation that would undermine the strong rules at the FCC, which were fought for by millions of Americans, and are calling on lawmakers to publicly oppose Ajit Pai’s plan, and require the FCC to act with transparency and address serious irregularities in its rulemaking process.

Fight for the Future was also one of the leading organizations behind the historic Internet-Wide Day of Action for Net Neutrality on July 12, which drove a record breaking 2 million+ comments to the FCC and Congress in a single day. Learn more at fightforthefuture.org