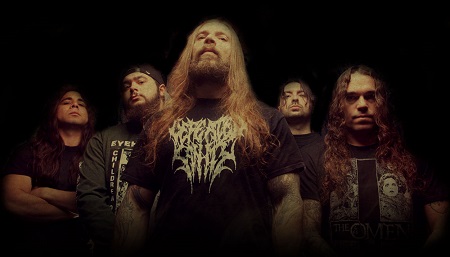 03/17/17- “BROKEN HOPE: Moved over to a mixing and mastering facility (aka: Mercenary Digital Studios) and are finishing the new “MUTILATED and ASSIMILATED” album!

“MUTILATED and ASSIMILATED will be unleashed this summer!!!

Mutilated & Assimilated is the follow-up to Broken Hope’s critically acclaimed release, Omen Of Disease (2013).  The album will most likely become known, at least momentarily, as the album that featured Jeff Hanneman’s fN’ guitar collection!! All of Jeremy Wagner’s and Damian Leski’s rhythm guitar tracks on Mutilated & Assimilated were recorded using the Jeff Hanneman guitar collection Wagner acquired from Hanneman’s estate…and no, sadly it does not include THE Les Paul, we already asked him. Wagner replied, “I don’t have that guitar. That’s one Jeff’s wife wanted to keep–and he actually gifted to her years ago.”  Regardless, one of the guitars he did acquire was Hanneman’s “punk rock” Jackson, a 1988 Soloist model covered with punk band stickers. The guitar was used on the South of Heaven album and tour, Seasons in the Abyss and it was used on the Clash of Titans tour, a 1990-91 tour that featured Slayer, Megadeth, Testament and Suicidal Tendencies – all at their peak.  Wagner added, “It’s in the ‘War Ensemble’ video, it’s on the cover of Decade of Aggression.  When I was a teenager, that was such a legendary guitar.” 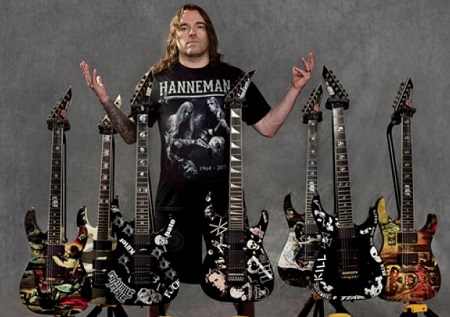 “I feel a real responsibility to Jeff and to Kathryn (Hanneman’s widow) to use these guitars in a way that honors him. As long as I own these guitars, I will use them and carry on Jeff Hanneman’s legacy. He remains a huge influence to me, and I probably wouldn’t be here as an extreme metal guitarist/lyricist without him,” said Wagner.