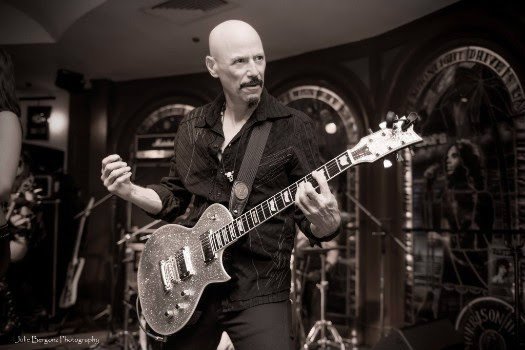 Throughout his forty-year music career, Bob Kulick has worked with an astonishing array of artists: from Meat Loaf to MOTÖRHEAD. From KISS to Michael Bolton. W.A.S.P. to Diana Ross as well as legends such as Roger Daltrey, Alice Cooper, Lou Reed and Paul Stanley’s first solo album and tour.

After serving as a sideman and producer for much of his professional career, Kulick has decided that it was time to release a solo album — and he brought along a few of his good friends to support him in the endeavor.

“Skeletons In The Closet” will be released in late spring through Vanity Music Group (distributed via RED / Sony Music).

Joining Bob on the album are:

Bob himself provided all of the guitar tracks and co-produced the album, along with Bobby Ferrari at Vegas View Recording in Las Vegas, Nevada.

“After finishing the five new songs, the idea of including five of my favorite songs from my past rounded things out nicely,” Bob says. “Brand new songs and then the ‘skeletons in the closet!'”

“Skeletons in the Closet” tracklisting:

1. Player
2. Not Before You
3. London
4. Goldfinger
5. Rich Man
6. India (from MURDERER’S ROW)
7. Skeletons In The Closet (from MURDERER’S ROW)
8. Guitar Commandos (from Skull — also features a guitar duel with Bruce Kulick)
9. Can’t Stop The Rock (previously unreleased track)
10. Eyes Of A Stranger (from SKULL)

His talents have earned Kulick a dozen gold and platinum records, and aside from writing for the traditional album format, he’s written and performed songs for Nickelodeon’s SpongeBob Square Pants (David Glen Eisley’s “Sweet Victory”) and the theme song for WWE’s superstar wrestler Triple H, “The Game”.