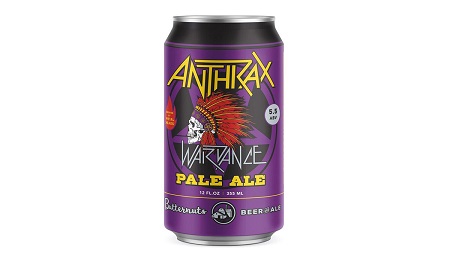 We recently posted a couple of articles on the new craft beers from Exodus and Behemoth. Now the band Anthrax has teamed up with Chuck Williamson, owner of Butternuts Beer & Ale to launch their very own pale ale. Wardance, is the first new canned beer in several years for Butternuts.  A 5.5% ABV pale ale brewed with New York-grown and North American two-row malt and a mix of specialty malts.  The hops are sourced from both New York and West Coast growers.

“I’ve wanted to do our own beer for a long time,” says Anthrax’s Scott Ian, one of the original band members. “I am a fan of Butternuts, so when I found out Chuck was interested in doing a beer with us I immediately said yes.”

Williamson and marketing man David Ciancio (who, like Williamson, counts Anthrax as one of his favorite groups) worked with Ian and his bandmates to create a beer that fit the band members’ tastes and would appeal to the group’s fans.

“I spoke to Chuck about what we like and don’t like and what I would want from our beer,” Ian recalls. “It was simple: a beer that would be very drinkable yet still have flavor.”

Williamson and his team sampled the band on a test batch, and then worked the group’s feedback into a second batch that struck a power chord with the band.

“Wardance,” Ian says, “is a beer you can drink over and over again. And I have!”

The beer’s name references a circular mosh-pit dance Anthrax fans do during the song “Indians.” Wardance will be available in New York stores, bars and restaurants in late March. In the future, the beer will hit some of the nine other states in the brewery’s distribution reach.