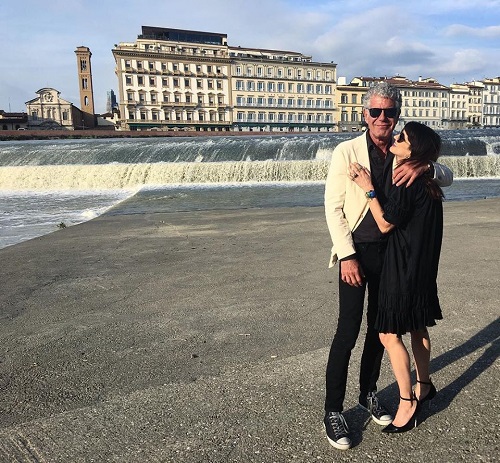 Anthony gave all of himself in everything he did.  His brilliant, fearless spirit touched and inspired so many, and his generosity knew no bounds.  He was my love, my rock, my protector.  I am beyond devastated.  My thoughts are with his family.  I would ask that you respect their privacy and mine.”

Celebrity chef Anthony Bourdain was found dead of an apparent suicide in Strasbourg, France on Friday morning (6/8).  He was 61 years old.

Another great one gone.  So tragic.

Just saw the sad news that Anthony Bourdain has died. I watched his show when I was in space. It made me feel more connected to the planet, its people and cultures and made my time there more palatable. He inspired me to see the world up close. #RIPAnthonyBourdain pic.twitter.com/Cb6IfmzylN

Maybe we all wanted to hang out with him. He was that cool, fun, frank, insightful. He introduced us to distant lands and to people with different traditions. And without ever preaching, he reminded us that we humans are far more alike than different. Thank you Anthony Bourdain pic.twitter.com/QMznx4JMhS

Wow! He funked me up with this quote & then he Changed Frequencies! Prayer going out for Family & Friends…??? @AlissiaB @CNN pic.twitter.com/yjVDNAwIrV

A friend of @StarTalkRadio. A friend of Food & Culture. A friend to us all. Anthony Bourdain, RIP. (1956-2018). pic.twitter.com/uVqEgldGsL

Dammit Tony. I’m so sorry. I’m so destroyed. I love you brother. I miss you too much already. My love & condolences to Ariane & Ottaviahttps://t.co/WcTA9wAnfF

“Low plastic stool, cheap but delicious noodles, cold Hanoi beer.” This is how I’ll remember Tony. He taught us about food — but more importantly, about its ability to bring us together. To make us a little less afraid of the unknown. We’ll miss him. pic.twitter.com/orEXIaEMZM

RIP doubtful. Tony’s restless spirit will roam the earth in search of justice, truth and a great bowl of noodles. @Bourdain

Our short time in the company of Anthony and his team in Nashville was one of the most exciting, joyous, and stimulating weeks we’ve had here at Third Man. He immediately went straight to the heart of everything with incredibly insightful questions and a predisposed need to understand the how and why of everything around him. An intellectual, raconteur, kind soul, who was as real as they come… Anthony and his crew worked harder than anything we’ve come across and they did it with grace, happiness and kindness, daily. We’ll miss you, sir. Our love to your family, friends, and crew.

Say a prayer for A.B. When a person takes their own life- in their final moments they are alone. Unconcealed. Without reason (for living). Such a hurtful notion. I take it to my heart. Why don’t you want to be around (us)? Don’t you know how great life could be with 1 alteration?

My heart breaks for his young child and the love of his life. His loss is both staggeringly shocking and quite the cautionary tale. I implore anyone who can, to watch CNN ‘s, “Remembering Anthony Bourdain.” Bear witness to his genius and to the unthinkable epidemic of suicides. pic.twitter.com/eGUNS5lIpT