Guitar World: Vito Bratta reflects on the ‘80s, when White Lion were kings of the hard-rock jungle, and the guitar rulebook was being rewritten by Eddie Van Halen. You can read the entire Guitar World interview with Vito Bratta @ this location. 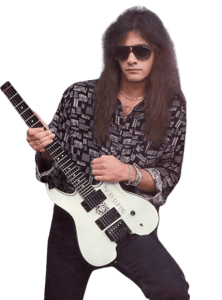 In the summer of 2018, Bratta went up into his attic, and for the first time since recording White Lion’s 1987 breakthrough sophomore album, Pride, brought down the case containing the remnants of the guitar he used to record that album: a sunburst 1979 Fender Strat modified Van Halen-style with one humbucker (Seymour Duncan JB), one volume knob and a Floyd Rose tremolo system.

The strings he used to record Pride were still on there. Alas, the guitar had seen better days. Foam inside the case had liquified from being up in a hot attic for decades. The Strat was his talisman since White Lion was coming up in rock clubs, including legendary Brooklyn hotspot L’Amour. “It’s ridiculous how I wore it out,” Bratta says of the Strat. “It was almost fretless. But I couldn’t afford a fret job, so I did the album with that guitar.”

On Pride, Bratta played the Strat through a Tube Screamer overdrive pedal and into an old 100-watt Marshall Super Lead, which he still has somewhere. After he finished his last guitar track for the album, he put the Strat back into its case.

“And I hear it pop,” Bratta recalls. “The wood shattered inside where the Floyd Rose connected. So, the guitar recorded Pride – and then it died in front of me. It just snapped. It was terrible.”

“After the first Van Halen record, he changed the way people play. He rewrote the book. I’m 16. Guess who was buying the book?”

On Leaving the Music Industry:

“I knew what decades mean to people. I know that the Sixties ended, and the Seventies came in, then the whole Eighties thing came in. So, I knew that was coming down the pipe.”

His father has passed and he’s now caring for his mother at home, as well as looking after another family member:

“And, of course, everybody out there is like, ‘Come on, you could do tours,’” Bratta says. “Put my mom in a home just so I could go on tour? I’m not gonna do that.”

You can read the entire Guitar World interview with Vito Bratta @ this location.