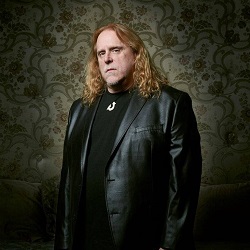 Warren Haynes: Robert Hunter’s lyrics were timeless stories that transported the listener to another time and place. The music was the vehicle that brought us there. The uncanny combination of those two worlds made for an overall experience that was beyond just the music by itself.

I’ve always felt and said that it was of monumental importance that the Grateful Dead hitched their musical wagon to someone whose lyrical strength and concept was as strong and unique as their musical contribution. It was a marriage that was meant to be if ever there was one. I’ve often thought how differently that catalog of songs would be perceived if the music were coupled with typical rock song or pop song lyrics.

I recall when I first came into the whole Dead scene as somewhat of a late comer, seeing all the bootleg T-shirts with song lyrics on them. It still amazes me how many single lines from any given Robert Hunter lyric can stand out enough to warrant being on a T-shirt.

Through my playing with Phil Lesh and, eventually with The Dead, I met Hunter and was amazed at what a sweet, down to earth, unique human being he was. Private for sure, but someone who somehow miraculously hovered around that ever-growing scene in his own private airspace without being caught up in the day-to-day enormity of it all. The conversations we had varied from really deep subject matters, as one would expect, to totally lighthearted small talk, which you never expect to have with a wordsmith of that caliber.

Being given the opportunity to write music to some of his lyrics was a great honor for me. With “Lay of the Sunflower” I had just started reading the lyrics for the first time when a melody instantly came into my head followed shortly thereafter by chord changes. When I told that to Phil Lesh he said “Jerry used to say the same thing.” There was something about Hunter’s lyrics that seemed to lend themself automatically to a melody. I recall a conversation I had with Hunter after Gov’t Mule recorded “Lay of The Sunflower” with Phil, in which he mentioned to me that the music he had written for that song was completely different than what I wrote to which I responded that I didn’t know he had written music for it and was surprised to hear that. He responded that he wrote music to all of the songs but never showed his music to Jerry as he didn’t want to influence the first impression of him hearing or reading the lyric.

His romantic sense of the importance of what came before us found its way into the present tense of all of our lives and made all of us more curious about worlds that existed long before we did, in a way that very few modern songwriters have been able to do.

There was only one Robert Hunter. Thankfully there are hundreds of songs that will live on – a part of him that became part of us. It would be impossible to choose a favorite. But for this moment “if I knew the way I would take you home.”

There was only one Robert Hunter. Thankfully there are hundreds of songs that will live on – a part of him that became part of us. It would be impossible to choose a favorite. But for this moment “if I knew the way I would take you home.” -WH