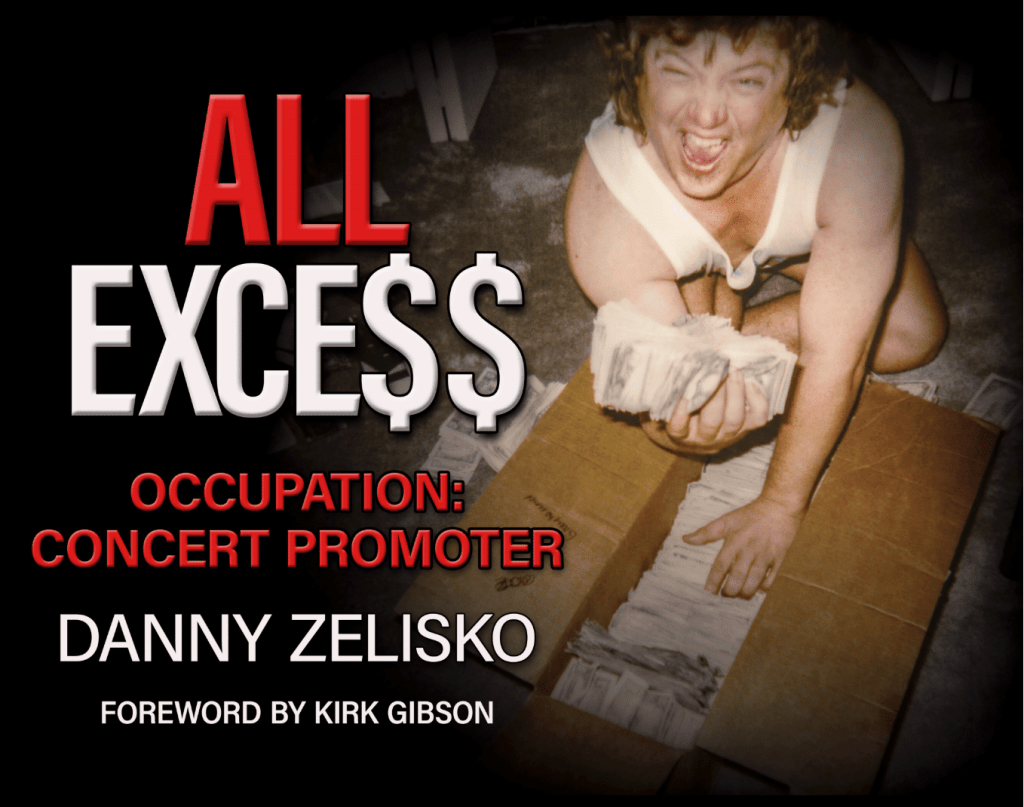 With hundreds of remarkable photos and astonishing stories,
Zelisko takes readers “behind the curtain”

Philadelphia, March 2021 – When concert promoter Danny Zelisko says, “I’ve got some stories to tell,” he isn’t kidding. In his remarkable new book, ALL EXCE$$ Occupation: Concert Promoter, takes you both backstage and on stage with music’s top stars, recounting his incredible five-decade career in which he has produced over 10,000 concert events throughout the country.

“I say that the book took me four years to write, but it’s really 60 years in the making,” Zelisko says. “Since all this stuff actually happened, the story wrote itself. I just had to be there to decipher it, which was the hard part!”

In addition, Zelisko chronicles his lifelong love of sports, his passion for collecting memorabilia and autographs, as well as some of the incredible friendships he formed while in his pre-teens with giants such as Chicago Cubs shortstop/first baseman Ernie Banks and Chicago Bears stars Brian Piccolo and Gale Sayers (the bond between the latter two was the basis of the beloved film Brian’s Song). Of Sayers, who recently passed away, Zelisko says, “Gale knew how close Brian Piccolo and I were, and was a great comfort to me and my dad at Pic’s wake. I won’t ever forget his kindness.”

Zelisko also talks about his first impressions and situations that followed with concert business legends Bill Graham and Shep Gordon, who went on to be his close friends and mentors throughout his career.

What message does Zelisko hope readers will take away from the book? “Anything and everything is possible,” he says. “I want to inspire people – whatever they want to do, they can do it. You see a picture of me with Robert Plant or Muhammad Ali, and you might think, how did this guy get there? That’s the story I tell. And it can happen to you, too. You just have to believe in yourself and never quit.”

How does a starry-eyed Midwestern kid go on to become one of the biggest concert promoters in history? Zelisko details his rise from scrappy beginnings to overseeing iconic stadium shows. “A lot of people have no idea what a concert promoter actually does, so that’s something else I hope people take away from the book,” he says. “There’s the great times – hanging out with the stars, the fun, the partying – but there’s awful times, too. And there’s the work. My team and I are responsible for every aspect of putting on a show. Without the great people who have supported these promotions, day in and out, I could never have done it. They are the stars behind the scenes”

At its heart, ALL EXCE$$ Occupation: Concert Promoter is a tale of friendships. Zelisko’s longtime pal and baseball legend Kirk Gibson wrote the book’s Foreword in which he describes the author as “the straw that stirs the drink.” “I’m very fortunate to have made such incredible friends,” Zelisko says. “I think a big reason for that is because I’m always very honest with the people I deal with. I can admire them and worship what they do, but I deal with them straight and tell them the truth. I think that’s how you last in the business, and it’s how you maintain relationships.”

ALL EXCE$$ Occupation: Concert Promoter is available at dzplive.com, you can also get it from Kindle, Amazon, and Amazon Print on Demand (for outside US orders) all shipping included.

Here’s what the stars have to say about the book!

Roger Waters
I approve of your book. I particularly like the photo of you with the big box of cash after the Pseudo Floyd gig. Though the touching bit is the ’72 Chicago gig, Pat Leonard stuff. Nice!

Joe Bonamassa
“Never a dull night hanging out with my friend Danny Zelisko and hearing classic music stories of the bands I grew up with. Looking forward to reading his book.”

Rob Halford
From Chuck Berry to Barbara Streisand to Whitney Houston as well as Judas Priest – Danny has worked with them all, And along the way witnessed huge moments not just in music but also our country’s history and culture. This book is one hell of a ride from a guy who’s had one hell of a life. With many moments to make, no doubt!”

David Ellefson
“So proud of my dear friend and legendary Arizona concert promoter Danny Zelisko as he releases his memoir “All Excess”. Danny has promoted most every Megadeth show in the area since the “Peace Sells…” tour in 1987. Order a copy now and savor some killer stories of the concert business harkening back to when the independents ruled the roost. I’m proud to be a part of his story.”

Previous: Engineer/Producer Eddie Kramer Talks About Recording Jimi Hendrix’s Version of “All Along the Watchtower”
Next: “All Right Now” by Free Re-Enters UK Charts Over Two Decades After Its Release – The full in bloom Chronicles