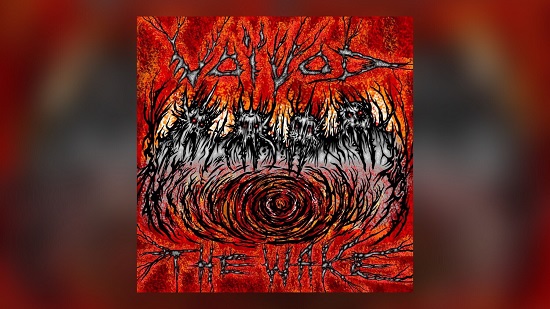 Canadian progressive sci-fi metal innovators Voivod will be celebrating their 35th band-anniversary with a new album called The Wake. The upcoming studio effort will be available worldwide on September 21, 2018 via Century Media Records.

The highly anticipated successor to 2013’s Target Earth was recorded and mixed by Francis Perron at RadicArt Recording Studio in Canada. The album‘s artwork was once again created by Voivod drummer Michel “Away” Langevin and can be seen above.

Drummer Michel “Away” Langevin: “We are thrilled to let you know that our new album, The Wake, is completed! The music is like a futuristic prog thrash metal trek with many twists and turns, and the story involves the usual Voivodian topics: disasters, chaos, conflicts, strange plots and alternate consciousness.”

Guitarist and songwriter Daniel “Chewy“ Mongrain: “It is with great enthusiasm and pride that we will soon share with you the fruit of 2 years of labor in the form of an intricate, intense and colorful journey with our new album The Wake, expanding the boundaries of Voivod’s multiverse!”