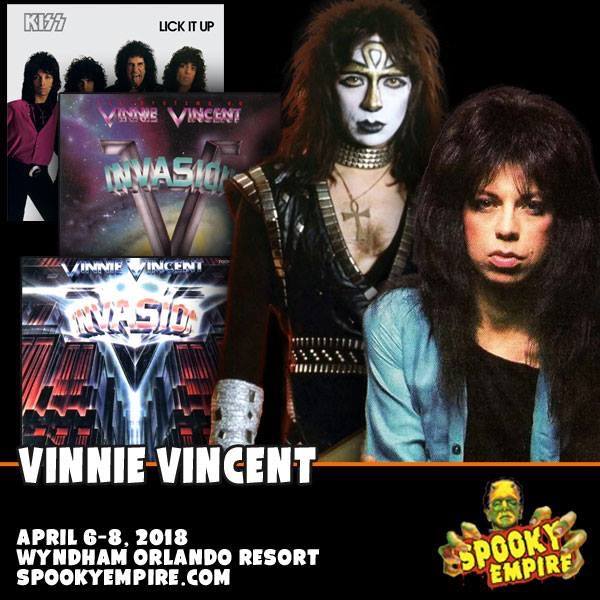 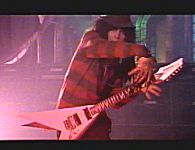 I will finally get to see you again at SPOOKY EMPIRE SHOW IN ORLANDO, FL on APRIL 6,7,8, 2018.  There will be AUTOGRAPH SIGNINGS AND PHOTO SESSIONS and more.  I’m hoping the merchandise, or part of it, will be ready by then.  I wanted to make our photos together unique and memorable, so I will be wearing the FREDDY OUTFIT I WORE IN THE LOVE KILLS VIDEO for our photo op sessions together.  The VINNIE SHIRTS are ready and the MINI VINNIE GUITARS are now in production along with other very unique surprises, so hopefully they will be ready for you at this incredible event.  It’s gonna be fun weekend and a great time for all… There’s lots more to come….so stay tuned. Ok?  SHOOT’N U FULL OF LOVE…. Always and forever, VINNIE VINCENT”

Spooky Empire has quickly become one of the most respected horror event promotions companies in the United States, bringing to life two of the most popular horror conventions in the nation, with fans attending from all over the world.

October’s event, Ultimate Horror Weekend, has grown significantly since its modest start in Fort Lauderdale in 2003. After finding a permanent home in Orlando, FL it has become one of the largest horror conventions in the nation, with more and more fans attending each year. Just when you think the show can’t be topped, Spooky Empire brings it bigger and better the next year! Each show is more monstrous than the last. The name describes it perfectly; it is THE ULTIMATE weekend for horror fans of all ages! Where else can you meet and mingle with your favorite horror movie and TV stars, buy any collectible you can imagine from your choice of over 200 vendors and artists, see new and up and coming films as well as your old favorites, take part in one of the largest Zombie Walks, get tattooed by some of the best artists from around the world, and of course party ‘til your heart’s content…or until you puke…and that doesn’t even list half of the events that go on during this non-stop weekend of horrors.

Still, even with the “Ultimate” event each October, Spooky Empire felt as though they could still give the fans more. So, in 2011 they introduced the first “May-Hem” event taking place on Memorial Day weekend. Although a more intimate show, May-Hem still proved to pack just as big a punch as its predecessor. This second event exceeded everyone’s expectations and has now become an annual event.

Spooky Empire’s ultimate goal is to provide memorable events for horror fans to return to each year, a place where they can congregate with thousands of other people with the same interests.