VIDEO: Watch KISS in ‘Lost’ Scene from the Movie ‘Why Him?’ 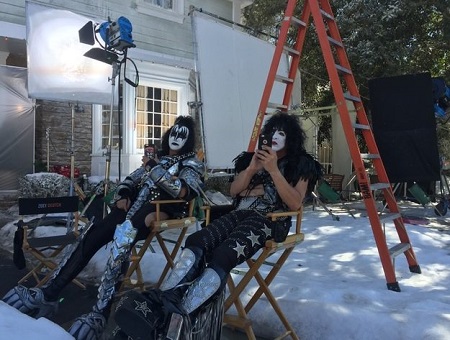 In the clip below, KISS members Gene Simmons and Paul Stanley are featured in a ‘lost’ scene from the movie ‘Why Him?’, starring James Franco, Bryan Cranston, Zoey Deutch, Megan Mullally and Keegan-Michael Key. The movie was initially released on December 17, 2016 via 20th Century Fox and grossed $118 million worldwide. According the tweet there are more deleted KISS scenes included with the video release.

“During the holidays, loving but overprotective Ned (Bryan Cranston) travels to California to visit his daughter Stephanie (Zoey Deutch) at Stanford University. While there, he meets his biggest nightmare: her well-meaning but socially awkward boyfriend Laird (James Franco). Even though Laird is a billionaire, Ned disapproves of his freewheeling attitude and unfiltered language. His panic level escalates even further when he learns that Laird plans to ask for Stephanie’s hand in marriage.”