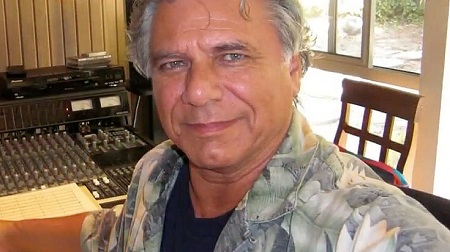 Ben Folds:
“A few words about the late, incredible musician and man, Paul Buckmaster….and I felt I should say a few things about him.

“He made quite an impact on me.

“Paul Buckmaster was best known for his string/orchestra arrangements which accompanied rock and roll records. Many famous ones – Elton John’s early stuff, and David Bowie’s “Space Oddity” at the top of his long career. Many obscure ones too.
He kept going, up until this year. He did some recent Taylor Swift music. He was always working. The endless list of his contributions might be nearly impossible to accurately compile. What I’ve seen on the web seems to leave a lot out. He even worked with Miles Davis. Suffice to say, he was prolific and has his special corner in rock history.

“And kids, there wasn’t anyone else like him. I don’t want to disparage all of the brilliant arrangers out there, but there was Paul, and then there’s everyone else. It’s like his job description was somehow different.

“I believe he was actually a composer. A composer, roaming alone, who parked his work inside ‘the folk music of the day’ as he put it to me once. It’s an arranger’s job to ornament, accent and fill out, which is quite an intense gig in and of itself. Paul seemed to identify the genetic code of a song, and then add the thing that you didn’t know was there before – that explained it all – as the last touch, as rock arrangements are nearly always placed atop an otherwise finished recording. To have added the last word to so many songs, and have that part be the revelation, and often the hook, was an incredible feat that he just kept shaking out of his sleeve, for at least four decades.

“How do you separate the strings of “Tiny Dancer” from that original recording? It’s the part of the composition that makes you feel the denim that was on the cover of the album. I knew the first time I heard “Drops Of Jupiter” it was either Paul or an incredible impression of him. I’m sure if you’d heard the track before Paul composed the strings, it’d have seemed finished. I wouldn’t have known where to cram anything else if someone had given me that track. It’s full without strings. But imagine deleting the strings? He burrowed himself right in there. He dignified, served and starred in the song, with that bizarre syncopation and sense of storm that was in his style.

“Hiring Paul was probably like having Frank Lloyd Wright build your house. You know the stories of people living in their Frank Lloyd Wright homes, and here comes Frank knocking at the door unannounced a decade later to make sure the furniture is where he intended it! In some ways you felt like you were working for Paul and not the other way around! But if you wanted it to be special, then you’d have to navigate the choppy waters of Paul and his ways. It was totally worth it each time, and also for the incredible conversations over dinner when it was finished.

“The first time he arranged for me, on the song “Landed,” I was taken aback at his score. I felt he’d changed something about the song. He’d weighed in strong, almost intrusively I thought. There wasn’t enough time for what he’d done to sink in, and with release date on our tails, I made the decision to leave the strings out. MISTAKE! I regretted it before it hit the stores and made sure all subsequent versions of the song were released with strings. From that point on, when I had the treat of getting to work with Paul, I made space for him. Inside the recording, and time to digest. And it was worth it each time. By the time I got to feature him on “Lonely Avenue” with Nick Hornby, I left him a five lane highway of space in which to work. He didn’t disappoint at all. He completed the tracks as if they were his compositions, and it was a beautiful thing to behold!

“I knew to let that go. He was telling me that there’s just the song. Just the melody. Just the meaning. The rest is bullshit and please shut up. And he was right. It was a smack down to remind me to focus on what’s important. He gave me as much encouragement and praise when appropriate. And he blew my phone up the whole time I was working on my concerto to remind me to be me, and not to let ‘classical music’ (a term he didn’t care for) bully me around. And then he’d give me an hour-and-a-half history chapter on Beethoven.

“I hope you all take some time to look into his many contributions. His was mastery and skill that is truly old school, likely not to happen again in quite that way. Pop music isn’t the same after Paul. He left his mark, no doubt. A master craftsman of orchestration with an open mind to the simplest of music. He was a mentor, cheerleader, and brutally honest taskmaster (Paul Taskmaster?) for me and many others. A real artist, and what a character!
The photo shown here was taken in my former Nashville studio, historic RCA Studio A. Paul is conducting as we record his arrangement of my song ‘The Luckiest’ for the Richard Curtis film About Time.”

Very sorry to hear of Mr. Paul Buckmaster’s passing. I feel very fortunate to have met him n’ have his involvement in GNR. My deepest condolences to his friends, fans n’ loved ones.

Recording with Paul Buckmaster and a 24-piece orchestra for my song “The Promise” being released tomorrow. #KeepThePromise pic.twitter.com/dkUQ6DiXFv

Previous: Beastie Boys Vinyl Reissues – The In Sound From Way Out, To the 5 Boroughs and Hot Sauce Committee Part Two
Next: A Perfect Circle: New Album Update & No-Photos-or-Videos Policy