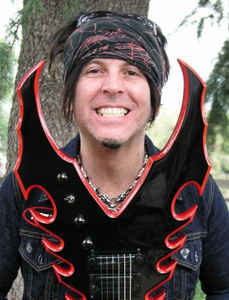 Tracii Guns: Eddie VH encounter. I had just come off tour and my gigantic book of CDs had been stolen off of the bus in Salt Lake City. I was in Music + on Laurel Canyon and Ventura Blvd. I went there to buy one CD to symbolically start all over again.

I was in the A bin looking at Aerosmith and AC/DC CDs and someone tugs on my shirt, and says, “ Haay Tracii. “ I knew it was Eddie because no one else had that voice. I turned around and he was on crutches after what he told me he had some hip surgery.

Anyway, I tell him what happened and that I just wanted to buy 1 cd. He helped me browse for about 30 minutes making all kinds of suggestions. Most were not guitar hero records but classic rock stuff.

We both finally agreed that Physical Graffiti had to be my new first CD. It was unanimously decided. Said see ya later and he took off. I didn’t have the heart to tell him I was there to buy his first album. That was an awesome day.