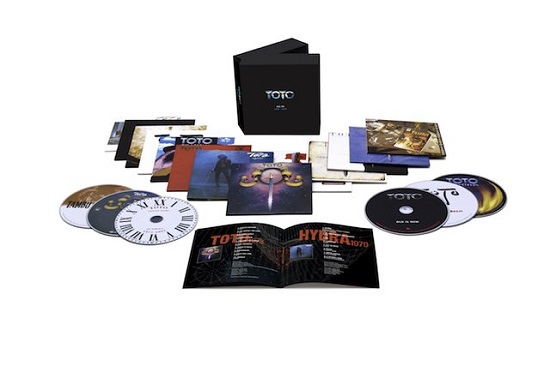 TOTO will release their definitive CD box set,All In, on May 24, 2019. The collection will available from all major retailers worldwide.

TOTO is pleased to announce the release of their definitive CD box set: All In via Legacy Recordings (a division of Sony Music) on May 24th. In late 2018, a deluxe limited-edition vinyl/CD version of the set was released direct to consumers and quickly sold out (this is now out of print and will not be reprinted). However, due to demand, a CD only box-set will available from all major retailers worldwide.

All In features the following TOTO albums on thirteen CD’s:

Toto, Hydra, Turn Back, IV, Isolation, Fahrenheit, The Seventh One, Kingdom Of Desire , Tambu, Mindfields, and Toto XX. The set also includes a previously unreleased Live In Tokyo EP from their 1980 tour, along with an album titled Old Is New.

The Old Is New CD features ten tracks, seven which are previously unreleased along with “Spanish Sea,” “Alone,” and “Struck By Lighting” which are featured on the band’s greatest hits collection 40 Trips Around The Sun. All of the music in the box set was personally remastered by TOTO along with Elliot Scheiner.

Also included in the box set is a 24-page booklet which includes new essays, and previously unseen photos.

TOTO’s Greatest Hits package titled 40 Trips Around The Sun was released in early 2018 and impacted charts all over the world. The band recently completed another set of tour dates in New Zealand, Australia and Japan. European shows are already scheduled for this summer along with an upcoming North American tour in the fall (Sept/Oct). Full details on the North American tour will be announced shortly. The 40 Trips Around The Sun tour has been the band’s most extensive run in years.

Few ensembles in the history of recorded music have individually or collectively had a larger imprint on pop culture than the members of TOTO. As individuals, the band members can be heard on an astonishing 5000 albums that together amass a sales history of a half a billion albums. Amongst these recordings, NARAS applauded the performances with more than 200 Grammy nominations. Collectively TOTO has over a billion streams worldwide on all streaming services.

With over 40 years together and literally thousands of credits, including the biggest selling album of all time: Michael Jackson’s Thriller, and accolades to their names, TOTO remains one of the top selling touring and recording acts in the world. They are the benchmark by which many artists base their sound and production, and they continue to transcend the standards set by the entire music community, being simply synonymous with musical credibility. Their repertoire continues to be current via high profile usage on broadcast television. They are pop culture, and are one of the few 70’s bands that have endured the changing trends and styles to a career enjoy a multi-generational worldwide fan base.