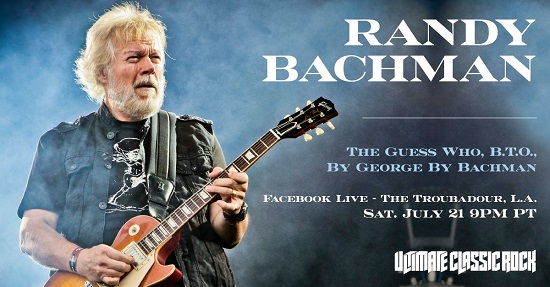 Randy Bachman will livestream his concert from the Troubadour in Los Angeles this Saturday, July 21st at 9:00pm PT.  Bachman will perform songs of The Guess Who, Bachman Turner Overdrive & George Harrison.  Stream the concert at this location.

The legendary guitarist recently released his album, By George – By Bachman, a moving tribute to his mentor and hero, George Harrison. Bachman began work on the project in March of 2017, enlisting his band of nearly a decade: Marc LaFrance as co-producer/drummer, Mick Dalla-Vee on bass and keys, and Brent Knudsen for additional guitars. Bachman and his band developed a process for creating demos for such time-tested material, reflecting the spirit of the source within their fresh approaches. Over weeks of back-and-forth, the songs took shape and indeed some of the demo recordings made it to the finished record. “While My Guitar Gently Weeps”, the album’s lead radio single, was one of the tracks that came together very quickly. Bachman and his band took a tougher flavoured edge to the track, adding hard-driving drums, thumping bass, raging guitars, and lots of vocals, and later sent the song to well-known blues guitarist, Walter Trout, who added in some screaming guitar solos.

In May of 2017, recording began at Armoury Studios in Vancouver, where artists such as AC/DC, Nickelback, the Cranberries, INXS, Seal, Diana Krall, Drake and Bruno Mars have all recorded. As LaFrance recalls the experience:…“once we started digging into the recording of the album, it almost became somewhat of a healing and liberating experience. Music can really take you to places you can’t imagine, especially while creating it. Sitting in the control room while Randy is ripping out a guitar solo, grabbing notes out of thin air, is good for the soul.”

The band lived with those first recordings for some months before returning to the studio in September to finish the album, this time at Calgary’s Studio Bell – a facility within the National Music Centre, where Bachman’s ‘59 Les Paul guitar (on which Bachman wrote and recorded “American Woman” with the Guess Who) is on display as part of Canada’s Music Hall of Fame. The studio houses all variety of rare and vintage gear, from the Rolling Stones’ mobile recording studio to a historic Trident (Triad) A Range Console. Using these tools connected Bachman to his previous recording lives as well…as part of channeling elements of the past to weave through the present.

As the most celebrated musician in Canadian history, Bachman counts among his many accolades his membership in the Order of Canada and the Order of Manitoba, as well as being twice inducted into the Canadian Music Hall of Fame and Canada’s Walk of Fame, and his inductions into the Canadian Music Industry Hall of Fame, the Musicians Hall of Fame in Nashville, the Canadian Songwriters Hall of Fame, and the Prairie Music Hall of Fame. He is a recipient of the Manitoba Order of The Buffalo Hunt, the Governor General’s Performing Arts Award, the ASCAP Global Impact Award, and holder of an honorary Doctorate in Music from Brandon University. Bachman has also earned multiple JUNO Awards as a songwriter, musician, band member and producer. In addition, Bachman can add best-selling author to his numerous list of accomplishments, having penned both Vinyl Tap Stories and Tales From Beyond The Tap.