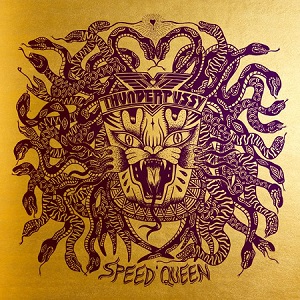 “Speed Queen,” the official video from Thunderpussy, has been embedded below. The track will appear on the band’s upcoming self-titled album, which will be released via Stardog/Republic Records.

“The “Speed Queen” is this mythic and magical woman who rides a motorcycle and travels around the country,” explains Thunderpussy guitarist Whitney Petty. “Nobody knows too much about where she came from or where she’s going, but she changes everyone she meets because she’s that powerful. I was thinking of (Thunderpussy vocalist) Molly (Sides) when I wrote it.”

Thunderpussy has received a lot of support from Pearl Jam guitarist Mike McCready, who was so taken with their sound, which blends classic-rock muscle with soulful vocals and punk energy, that he agreed to produce their debut seven-inch – and even make a cameo appearance on their track “Velvet Noose.”

Previous: Tom DeLonge, “The first ever DECLASSIFIED videos of UFOs are on their way”
Next: Paul Stanley’s Soul Station 2018 Japan Tour Dates Announced