The Mountain Goats: Glasgow & Brighton Shows Are Now Sold Out

The Mountain Goats:  Glasgow and Brighton shows are now sold out. Extremely limited tickets remain for the rest of the UK/EU tour.  A list of remaining dates can be found below.

Regarding the tour, the band said the following: “We have a bunch of new songs to play of course and a bunch of ideas about what else to do and I am so excited to bring this show over to you all. First time in Norway since forever! Opening night in Leeds will be be me & Matt’s fourth-ever duo show! We’ll be listening to the tapes of last year’s three-night run for inspiration but of course also playing stuff from Goths and who knows what else — every time you change up the presentation, it opens up new possibilities in songs you might not otherwise even think of playing. Can’t wait. Thanks everybody for the long wait, I know we don’t get over to the other side of the Atlantic that often.”

In other band news, The podcast, I Only Listen to the Mountain Goats, recently made its debut. The show finds Joseph Fink, creator of Welcome to Night Vale and Alice Isn’t Dead, in conversation with one of his artistic heroes, John Darnielle, singer and songwriter of the Mountain Goats. Season One explores the stories behind the Mountain Goats’ album All Hail West Texas, one song at a time.

In each episode, John, Joseph, and special guests discuss songwriting, storytelling, current events, and the art and artists that inspire them. Each episode will also premiere a brand new cover version of the song discussed that week, recorded just for the podcast by artists like Amanda Palmer, Andrew Bird, and Dessa.

On May 19, 2017, the Mountain Goats released their sixteenth studio album, Goths, via Merge Records. Bassist Peter Hughes described the album’s theme as goth, covering the bands that “never made it out of Fender’s Ballroom, the Gene Loves Jezebels of the world—the ones whose gothic paths were overtaken by the realities of life, or of its opposite.” The latest effort marks the first time the band did not incorporate any guitars, excluding bass guitar, into an album. 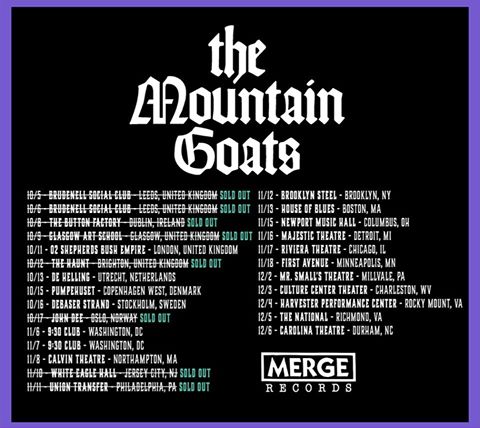