Terry Glaze on Pantera’s Early Songwriting Process, “It was a great team effort.”

The transcribed excerpt below was taken from the Full in Bloom Podcast interview with Terry Glaze (Terrence Lee), a founding member of the bands Pantera and Lord Tracy. You can also listen to the excerpt via the YouTube clip above.

In the first part of this segment, Glaze talks about how Pantera formed.

Terry Glaze:  I moved back to Texas before 10th grade in high school and at the end of my street there was a house with some music coming out of it.  I banged on the door and the garage door slid open and the bass player was Tommy Bradford.  I went in and hung out with them and soon I was in this band.  Tommy Bradford and me and the singer was Donnie Hart….and we started playing.  Then by the next year Tommy Bradford and I decided we wanted to play harder songs.  So he knew Vince (Vinnie Paul) from high school jazz band….and Tommy was in jazz band.  So we jammed 3-piece with Vince at my house.  It was so amazing.  Vince was so good.  So we decided to form a band and the way I remember it was me and Tommy and Donnie will join you…and Vince said ‘well, I’ll take your singer, if you take my little brother.’   And (Dimebag) Darrell was this little kid.  I think he was still in middle school.   Donnie had a PA and when you’re a teenager like that, you’re in, you’re the singer, you’ve got a microphone.  I wanted to play with Vince because I knew his dad (Jerry Abbott) was a recording engineer across town.  I was already starting to think, ‘I need to write some songs.’  So the five of us got together and we started playing parties, playing at the high school and stuff like that.  Then we started recording original tunes.  Once we started recording originals, I really wanted to sing my own songs.   So, through no fault of Donnie, I just wanted to sing my own songs.  So that’s kind of how we became a 4-piece instead of 5.  Meanwhile, Darrell, when he hits about 16, goes in his room for about 6 months and comes out, basically, fully formed and can play anything.  I think he won 3 guitar contests in Dallas before they said ‘you’re not allowed to be in these anymore, you’re a judge now.’  He was so much better than anyone else.  So here we are, these young kids and their father is a recording engineer and he agrees to manage us.   He starts sending us out to play in Abilene, Dallas and Ft. Worth and we start playing and we’re kids.  We live at home with mom and dad.  We’re playing bars and doing it and figuring it out.   I was really lucky to get in with those guys. 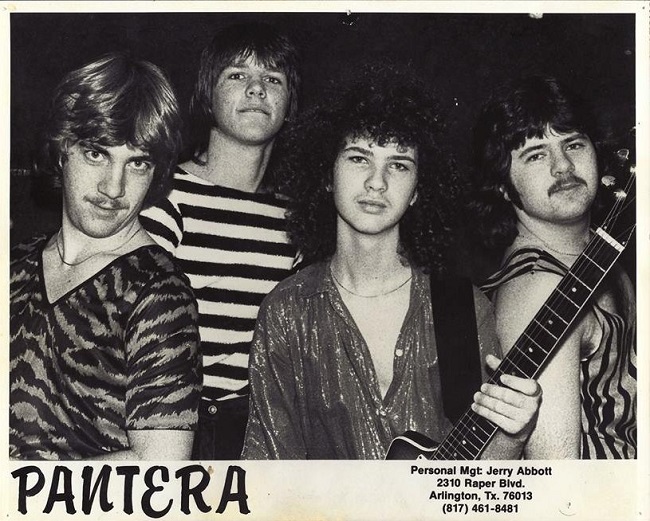 Terry:  Well, you know, you record originals and you’re doing songs and then one of the local radio stations would play local music every now and then and we somehow got on that show with our recordings.  The next step was, ‘let’s print a record.  Let’s put an album out, we’ll sell them off the bandstand.’

full in bloom:  Did you already have all the recordings at the time or was it like ‘let’s go in and and finish up a record?’

Terry:  We had been recording and we just thought ‘why don’t we just go to the next step.’  So we did the record (Metal Magic-1983);  one of our friends did the artwork.  We start playing originals and it just starts working.  And then, ‘well, we should do another record.’  You know, at that time, that kind of heavy metal music was underground and there were a lot of these homemade magazines from Europe.  We’re noticing other bands like Metallica, Anthrax….we’re seeing them in these homemade magazines.  So we send our records in and someone in Germany or England, they don’t know we’re these little kids.  We’re getting written up in these reviews alongside all our peers…nobody knows we’re these young kids.  So we’re doing it and figuring it out.  It was a great time to be a musician in Texas, a lot of opportunities to play, lots of gigs and you got to learn your craft.

full in bloom: ….I still remember, to this day, that you wrote “Nothin’ On (But the Radio).”

full in bloom:  So you came up with the music and lyrics for that song?

full in bloom:  That was a killer song.

Terry:  Thanks, man. I appreciate it. I always wanted to be a singer-songwriter. I don’t know why, I just did.

full in bloom:  Did everyone just kind of pitch in (on the songwriting)?

Terry:  Usually. So the first record I played guitar with Darrell. We were doing a lot of two guitar stuff and that was our first shot at it. After we toured around Texas and played all those songs, we started stripping it down, kind of Van Halen-style and that’s why I didn’t play guitar anymore. Live I played guitar on a lot of the songs from the second album (Projects in the Jungle-1984), but in the studio, there was no point because Darrell was, by this time, a fully formed monster. Different influences of music coming in. Typically on those songs, Vince and Darrell would come up with tunes and then I’d write the lyrics, or the dad would help out, so it was typically like that. Everybody was kind of helping out. It was a great team effort. We were playing every week, whether it was 3 nights, 4 nights, 6 nights a week. The band was really sounding good.

Listen to the entire interview at this location.