Paxton is best known for his roles in Titanic, Aliens, Twister, Weird Science, Edge of Tomorrow, The Terminator and several others.

“I’m extremely saddened to hear of the passing of Bill Paxton, someone I was lucky enough to know and call a real friend.  I met him when I was 16 as we both worked delivering the L.A. Times in the morning.   We were the only “young ones” there as most of the people were at least 40.

“Bill had moved out to Santa Monica to be an “actor”. I told him I was gonna start a band.  He was just an incredibly cool, friendly, optimistic guy that never got discouraged when he couldn’t get even an audition for the smallest roles.   But every morning at 2am he came into work with a smile.   He loved music too, so we’d sometimes go to punk rock shows and then go straight from the Starwood or Whiskey to delivering the morning paper to Northside SM.

“So many great stories and times I will never forget.  I’m so sad for his family and their loss.   It’s always hurts when someone passes away, especially when it’s too soon and without warning.   And the older you get the more often it happens. And each time it does, people think of the good things to say and remember them by.

“The special thing about Bill is, I have never heard anyone that knew him, from before his success or during it, that ever had anything but great things to say about him. Truly an amazing person, who literally followed his dream, and never gave up.

“Lastly, Someone just sent me this photo. That’s the way I remember Bill, not cause he’s wearing a Suicidal Tendencies shirt, but that smile. And of course he was an amazing actor and director…but more importantly he was as good a person as they come! Rest in Peace. You will be missed but never forgotten. So proud of you and thankful that I knew you.”
Mike Muir 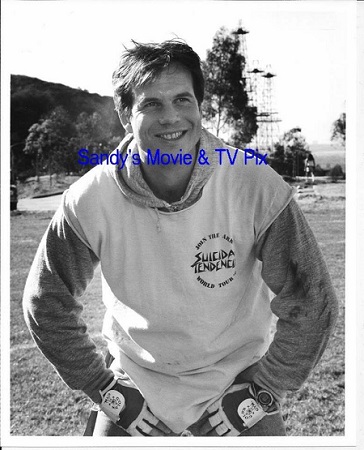