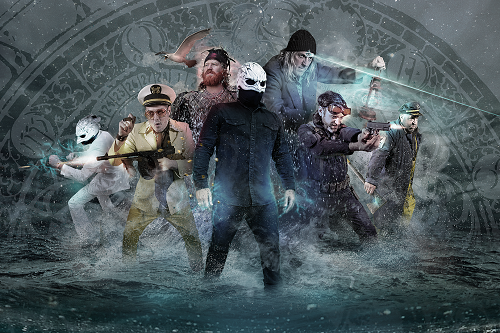 Legend of the Seagullmen, a group that features Danny Carey (Tool), Brent Hinds (Mastodon) and filmmaker Jimmy Hayward (Jonah Hex, Free Birds, Horton Hears a Who!), are getting set to release their self-titled debut album on February 9, 2018.

Billboard recently interviewed Hayward and bassist-music director Pete Griffin (Zappa Plays Zappa, Giraffe Tongue Orchestra, Dethklok) — already nine songs into tracking demos for the next album.  A few excerpts from the interview can be found below.

The album is really theatrical. How did you reflect some of those dark undertones in the music?

Hayward:  An old studio guy told me back in the day: “Always reward smart people for paying attention.” As you really dig in, the layers come off. Like, if you look at some of the lyrics of [album track] “The Fogger,” where we talk about retribution against the abusers of the beautiful life in the ocean — there’s more there than the surface story.

Griffin: That’s what got me interested in the band to begin with. I hadn’t heard a note when I talked to Jimmy about the whole thing. Now, I’m not sure I ever want to be in a band that doesn’t have a movie director in it. The whale noises, the creaking ships and stuff like that — I don’t know of anybody in any band I’ve ever been in who would’ve thought to put that much into a record. It’s almost like an old radio show. The visual thing and the music can be at odds sometimes, but I don’t think that’s the case with this. I stand behind the music first, plus it has this heavy visual component. Even just the liner notes and album artwork are on a level that I don’t think exists elsewhere.

You recorded Owen Wilson, Amy Poehler, and Woody Harrelson’s voice parts in Free Birds separately, but there was also a lot of improvisation. A lot of the band recorded separately as well.

Hayward:  I had to keep all those conversations in my head, sometimes for months. Improvisational comedy is one of my strong suits when I make movies. That’s what I do all the time when I’m with my friends. And we make music that way.

People might assume that improvisation would be impossible without everyone being in the same room.

Hayward:  That’s my favorite thing to do.

Griffin:  That’s what was amazing about me coming in when a lot of the stuff had already been tracked. When it came time to get ready to play live shows, I had no idea how well Jimmy played guitar. That shouldn’t be surprising, but unconsciously, there’s almost like a jealousy there. I’ve spent my entire life studying music, and then I run up against people like him, where there’s a natural ability that’s undeniable.