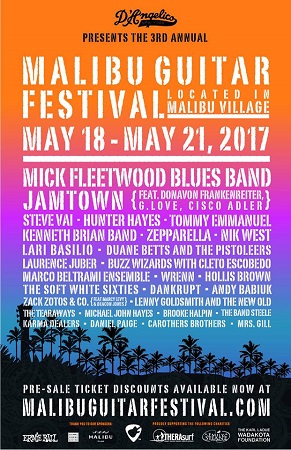 Steve Vai will be performing at the Malibu Guitar Festival 2017 on May 19th. The festival runs from May 18th through the 21st, with an all-star charity night on Thursday and a night of hot licks and fantastic jams on Friday- both at Casa Escobar, then a full day of music at Malibu Village on Saturday May 20, rounding things off with a Stones Brunch on Sunday. Other featured performers include Mick Fleetwood, Tommy Emmanuel, Lari Basilio, Hunter Hayes, Laurence Juber, zepparella, G. Love, Nik West and many others. More info @ MalibuGuitarFestival.com

During the week there will be jam-sessions, master-classes, swap-meets, schools performances, guitar demos, and a one-of-kind guitar themed art show.

The Malibu Guitar Festival is the brainchild of local producers Doug DeLuca and John Watkin, and has already raised tens of thousands of dollars for local charities.