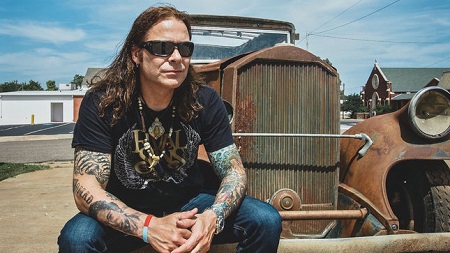 Mike recently spoke with AntiHero Magazine about his new album and White Lion. Here are some highlights:

“So what does it all come down to? It just comes down to, basically, strong songwriting. Now, in a song like “Coming Home”… “Coming Home” will be added to the list of the five strongest songs that I’ve written in my career. And at the same time, the song is 100%, everything Mike Tramp is, and has become. But it also, at the same time, goes through three big verses and three big pre-choruses. And it tells a story from start to finish, and asks the questions… You know, like, “Don’t regret what you did wrong. Man, you had your share of fun.” You know, “You would do it all again, maybe with a different ending.” I mean, it’s all fucking there.”

““High Like a Mountain”, I mean, actually the inspiration came from the feeling of the song. This was a song that I was… Sometimes you ask, “Where do songs come from?” Sometimes the music comes before you settle down on the lyrics, or sometimes vice versa. But this time, I was in Indonesia, where I partly spend a lot of my time because my wife and two young children are there. And the guys I was doing a project with there, which was basically a live project, were late. And I’m sitting in the rehearsal room, and suddenly I just started playing this riff. And after rehearsal I came back home and I said, “You know, there’s something in this.” And I started writing the song. And sometimes you just start singing that line over the chorus, before I’d written the verse “It’s getting high like a mountain.” And you know, it’s sort of reflected…

“No, drugs never connected with me. I’ve always seen my life more as an athlete, and how I felt the next day when I woke up. And it’s probably one of the reasons I was able to, sort of, go through life the way I did it. I mean, I really, really paid attention. And I didn’t want to let people down. But most of all, I didn’t want to let myself down. And I’ve seen people fall on their ass. And I just think it’s one of the most disgusting things in life, is when you let go of yourself. You know, I have enjoyed, many times, sharing a good amount of beer at a ball game, or in front of the TV, or in the bus when we weren’t playing the next day, and stuff like that. But I’ve always been able to go to bed when I still knew my name.”

“I mean, you have to do drastic things. It’s like, for all of you people out there who, unfortunately, happen to be in a divorced family, or come from a divorced family….Could you ever imagine your mom and dad back together? I mean, sometimes, when something has split, there’s a reason for it, it needed to split. And there’s so many reasons. But the biggest reason is that the band does not want to be together. And this is not a matter of us not having offers on the table, you know, for big money. It’s not a matter of us, you know, think we should do it because Cinderella’s doing it, or Tesla’s doing it, or Night Ranger, or Firehouse. White Lion broke up because we did not want to be together anymore. And that’s what I believed ever since.”

“You know what? I would be very surprised to see this guy with a guitar in his hands again. I mean, how would you expect that to happen for somebody that’s basically been sitting at home for 25 years? Not been in the music business, and then suddenly come out? No, it would not happen. And you know what? Sometimes I’m forced to say it in another way so people can understand it. Unfortunately, a lot of other singers don’t follow the same recipe.”

“I’m not ditching White Lion; they were the greatest years of my life, and I am so happy to all the people that raised their hands and cheered for me out on stage. But right now, I’m a father of three. I’m a guy with a guitar around my neck. And I do what I can, not what I can’t.”