When I first interviewed you, in 1987, you said how much you hated LA.

Actually, I have wonderful memories of LA from when I was seven years old all the way up to when I was twelve. I was kind of raised in the LA music scene and it was great. I watched it go through these music trends in my short little lifetime up to that point. But what it turned into in the eighties was something that was unrecognizable from an integrity point of view and a creative point of view.

The whole thing had just sort of been diluted. I have to say, in hindsight, that at least it was exciting in the eighties, at least there was a scene. Right now there is no LA scene. But there was a huge scene going on in the sixties and right through the seventies. It was really identifiable and really musically revolutionary. And in the eighties, it just turned into this other thing.

You’re talking about hair metal. But let’s be truthful, in the early days of Guns N’ Roses you had the big hair and the make-up too.

I fucking hated the whole scene, man. At least if you were in the UK you had some cool bands that represented the eighties, at least from a rock’n’roll and metal point of view. You had some really cool, credible music coming out. But in Los Angeles, it was just bullshit. And we were coming up in the midst of all that.

Everybody was fucking converting to the industry standard to get a record deal and get girls, this whole thing. Where our band was coming from was the antithesis of all that, and it’s something I’m really proud of. 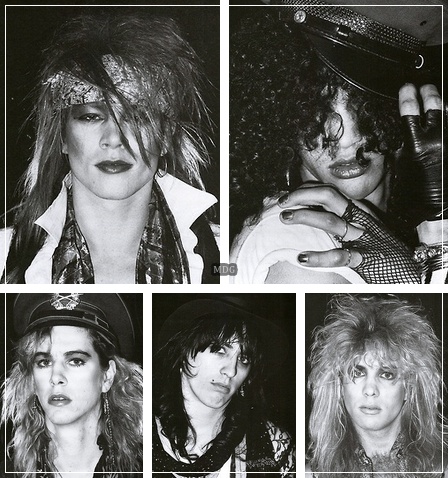 Back then, it was the five of you against the world, a real gang.

Yeah! Shit, every so often I’ll think about that. In passing it will pop into my mind how we managed to get wherever we managed to get to, and I’ll go back to the beginning. It was this collective drive that we had, this camaraderie, and this passion for the kind of music that we did, and also this attitude of fuck everything else that’s going on and all the obstacles and all the bullshit in the music business in LA at that time.

There was a thing that we had that drove us, you know? And it was unsaid. It wasn’t like we sat around and talked about it. It was complicated and simple at the same time. And it was really cool because it was one hundred fucking percent genuine.

READ THE ENTIRE INTERVIEW @ THIS LOCATION