Senate Votes to Save Net Neutrality 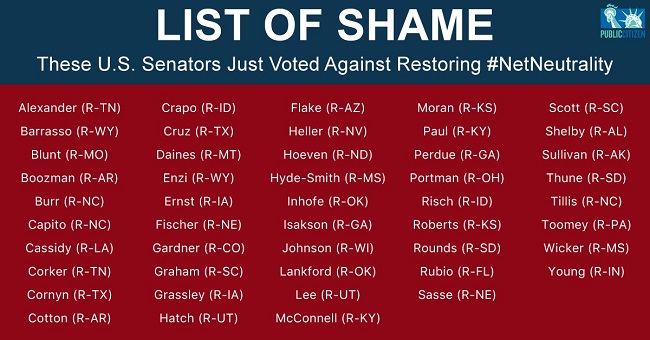 The U.S. Senate just voted 52-47 on bill to restore Net Neutrality.  Three Republicans (thank you!) voted to protect the internet – 47 Republicans voted against it (view picture above).  Now the final bill goes to the U.S. House, where the measure is not expected to advance.  Call your Congressman (202) 224-3121 and tell them the internet belongs to the people, not big business.

In today’s divisive political climate, Net Neutrality is the only thing nearly all citizens living in the United States seem to be able to agree on, and that’s because it should be a nonpartisan issue.

Here’s a list of how much money the senators who voted against Net Neutrality have received from Internet Service Providers:

The Senate just took an important step toward reversing the Trump administration’s disastrous decision to repeal #NetNeutrality. Now the House must side with the 86% of Americans who support net neutrality and pass this resolution to protect our free speech and democracy.

We just voted to restore #NetNeutrality & we won! Thank you to everyone who spoke out to #SaveTheInternet, we won’t stop fighting because access to a free and open internet effects everyone. pic.twitter.com/LSf5gjw9Tb

The Senate just voted to restore #NetNeutrality. This wouldn’t have been possible if the American people hadn’t spoken up — now the House must pass this bill and stand with us to save the internet.

I just talked to a colleague who told me that phone calls were running 6,000 to 10 for #NetNeutrality. It is working.

Ajit Pai can put that Senate #NetNeutrality loss in his giant Reese’s coffee cup and drink it. The next battle we need to win is in the House. Keep fighting for a free and open Internet. pic.twitter.com/uSRkMCHpS7

A victory in the Senate today for the thousands of Ohioans who depend on a free and open Internet. #NetNeutrality is about keeping the Internet accessible for small businesses, students, entrepreneurs, startups, and Ohioans looking for jobs – and these people won today.

We forced a vote on #NetNeutrality and WON. Remember what this moment feels like & remember that w/ a Senate majority, we can make real progress. Today: internet freedom. With a Dem majority: better health care costs, action on gun violence—that’s just the start.

Now that the Senate has voted to save the open internet, the vote moves to the House. I urge all my colleagues to stand with the overwhelming majority of Americans who support #NetNeutrality. pic.twitter.com/Hwynz9ql5v

I commend the US Senate for standing up for the millions of American people who were ignored by the @FCC majority – your vote to restore an Open & Free internet places us on the right side of history. #NetNeutrality #NetEquality #FCC

Good news for consumers & #freespeech: US Senate just voted 52-47 to pass a CRA overturning the Trump Admin’s repeal of #NetNeutrality rules. This is a key step toward preserving a fair & open Internet. Now we must keep pressure on the House to vote & help #SaveTheInternet!

.@SpeakerRyan, bring up a vote to protect #NetNeutrality immediately. Americans have made it clear they want to #SaveTheInternet. Ignoring them would be an affront to our democracy.

Politicians see the light when they feel the heat! This victory was the result of the energy activists across the country brought. Let’s keep it up and bring it home! #NetNeutrality https://t.co/oVi4mDTUDD

On my way to the floor to cast my vote in favor of #NetNeutrality pic.twitter.com/wiCBDfc825