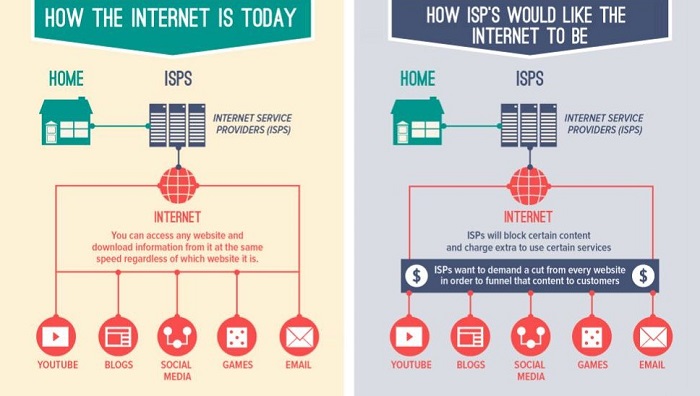 In today’s divisive political climate, Net Neutrality is the only thing nearly all citizens living in the United States seem to be able to agree on, and that’s because it’s a nonpartisan issue.  Now, the FCC is proposing to repeal Net Neutrality rules and the only people who seem to agree with them are a select group of politicians and those who are part of giant corporations.

We’ve put together a list of comments from around the web of those who oppose repealing Net Neutrality.  FYI, we couldn’t find any comments from those pushing for a repeal, other than politicians, giant corporations and business people who had something to gain.

This is about having an internet that is fair for everyone regardless of their income.  We have included links and contact info below, please spread the word and lend your energy to voice your opinion.

We will continue adding more comments as they come in.

PLEASE call 1-202-418-1000 to reach the voicemail of the Chairman of the FCC. Say your name, city, and state and that you oppose the repeal of Net Neutrality. Took 12 seconds.

IMPORTANT: We’re seeing a lot of posts encouraging people to call & email the FCC commissioners about Net Neutrality. That energy is likely wasted. EVERYONE NEEDS TO BE CALLING CONGRESS RIGHT NOW. They have the power to stop the FCC vote. Spread the word! 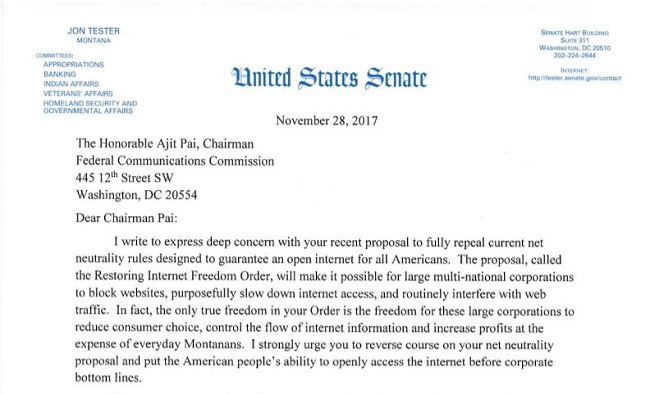 Over the last 6 mos, my office has investigated a massive scheme to corrupt the @FCC‘s comment process on #NetNeutrality by impersonating 100,000s of real Americans.

The FCC has been unwilling to provide information that is critical to the investigation: https://t.co/xxFjSg6Pxf

Today the @FCC announced its plan to roll back #NetNeutrality rules, endangering our access to a free and open Internet. Read about how you can help here: https://t.co/bGESHL8xQS

Netflix:
“Netflix supports strong Net Neutrality. We oppose the FCC’s proposal to roll back these core protections. We’ve been supporting for years thru IA and Day to Save Net Neutrality with a banner on Netflix homepage for all users. More info in Q4 2016 earnings letter, as well. This current draft order hasn’t been officially voted, so we’re lodging our opposition publicly and loudly now”

Robert Reich:
“Folks, this is not a drill. Net Neutrality is the single most important safeguard against corporate control of the internet.”

Alyssa Milano:
“I know. We’ve faced a lot of issues threatening our democracy in the last year. But honestly, the FCC and Ajit Pai’s dismantling of Net Neutrality is one of the biggest. THIS IS A HUGE DEAL. And yet #SaveNetNeutrality isn’t trending.”

Kumail Nanjiani:
“Net Neutrality is an issue that will affect every single person here. We will never go back to a free internet.” 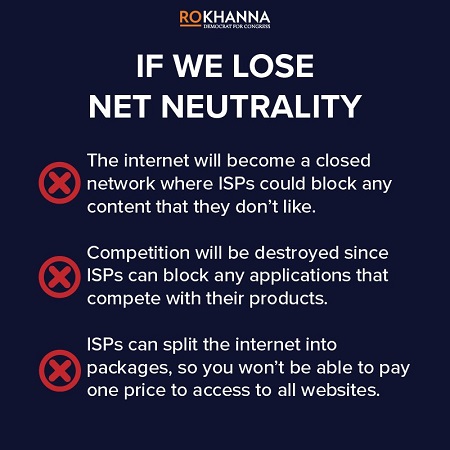 Kirsten Gillibrand:
“The FCC is siding with big corporations by releasing a plan to claw back #NetNeutrality rules. They were hoping you wouldn’t notice. We must fight back to defend a free and open internet.”

Anil Dash:
“Unlike Ajit Pai, I’ve led teams creating innovative new tech on the Internet. Everyone who’s done so knows that killing net neutrality is bad for society — not just because it harms tech innovation, but because it compromises our civil rights.

“And Pai’s history on this is clear — long before “fake news” became the tactic for undermining trust & accuracy in the public sphere, he was undermining researchers who were trying to prevent the spread of fake news. 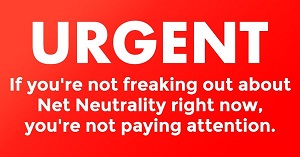 Twitter Public Policy:
“We strongly oppose the FCC’s proposed weakening of Net Neutrality protections and will continue to fight for an open Internet, which is indispensable to free expression, consumer choice, and innovation.”

Angela Belcamino:
“In short, Net Neutrality preserves our right to communicate freely online & protects free speech. Without it, ISPs can slow down competitors content, block opinions it disagrees with, & charge extra fees. In Summary: The internet without Net Neutrality is not the internet.”

Senator Brian Schatz:
“The Internet works because the people who charge you for access to it cannot charge different amounts for different content, depending on their commercial interests. You pay the ISP, you get the whole Internet. What the FCC is doing is revoking that rule.”

Jesse Cox:
“Not only is this flat out lying and trying to invoke the former Presidents name to cloud this issue in partisan bickering – but when nearly every company on the internet disagrees, you have to question his motives.”

Mark Ruffalo:
“Taking away #NetNeutrality is the Authoritarian dream. Consolidating information into the hands of a few controlled by a few. Dangerous territory.”

Red T Raccoon:
“If you don’t fight for Net Neutrality now, here are the questions you will ask later…

“Why is my internet so slow?

“Why is my bill so high?

“Why can’t I view this page?

“If you lose your mind because the internet is down or slow for 10 minutes, imagine if it was permanent.”

Elicia Donze:
“Without Net Neutrality artists will no longer be able to share their work online for free. You’ll have to pay to see anything we make—on every social media site. Artists, vloggers, photographers, musicians, writers, fanficcers, all creatives who rely on an open net to share work.” 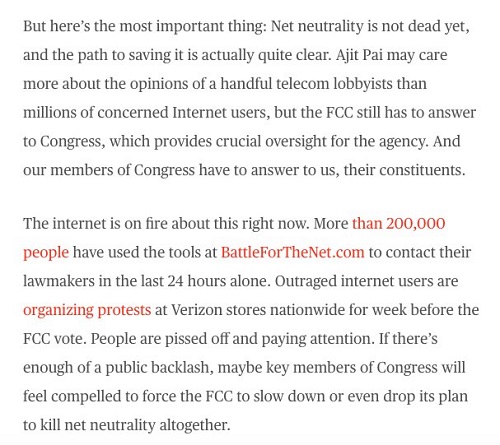 Bernie Sanders:
“If this passes, the internet and its free exchange of information as we have come to know it will cease to exist. #NetNeutrality ”

Erika Heidewald:
“The end of Net Neutrality is a giant step forward towards a world where only corporations have rights and people have none.”

Fire in the Pool:
“It’s this simple. NO ONE wins by killing #NetNeutrality except mega corporations. Democracy dies in the shadow of information control.”

Jeff:
“This isn’t a left/right issue. This is a freedom issue. The internet is the one of the last things we have that isn’t controlled by the Gov. Don’t let them censor us .”

Matthew P.:
“Remember when @tedcruz called #NetNeutrality “Obamacare for the Internet”? He was actually kind of right. Obamacare is first and foremost a ban on price discrimination for an essential life service the entire public needs. So is Net Neutrality.”

Senator Patty Murray:
“The idea underlying Net Neutrality is a simple one: the Internet should be free & open. I’m going to defend it in every way I can. Net Neutrality is critical to ensuring the internet remains a place where people can come together, make their voices heard, & make change. We have to fight back.”

David S:
“This could be your future” 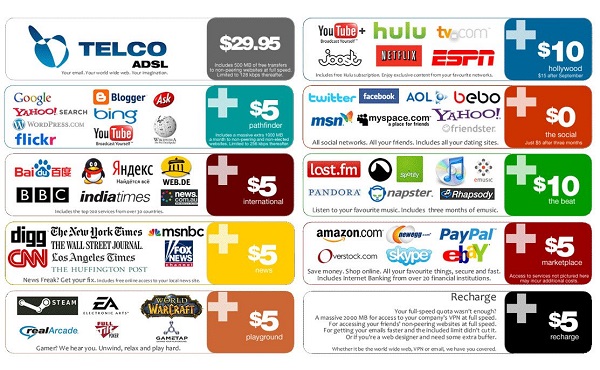 Joel C.:
“Kinda surprised at the lack of awareness in the #NetNeutrality situation. This is pretty much the last push before everything changes for the worse or remains the same. There’s no benefit for consumers if it changes so it behooves you to fight for your internet rights.”

Eric Schneiderman:
The @FCC intends to dismantle Net Neutrality—after a public comment process corrupted by a massive scheme that fraudulently used real Americans’ identities. It’s important to spread the word about this. Read my open letter at this location.

Joseph:
“I may support Trump generally but-. F*#K Trump and Ajit Pai Trying to get rid of Net Neutrality A terrible decision.
We must oppose, rally, fight and protest against this mistake.
We must work to make sure this doesn’t go into effect.
Protect what makes the internet fair for all.”

Richard Blumenthal:
“I stand with millions of American consumers, innovators, and entrepreneurs against Ajit Pai’s plot to gut Net Neutrality.”

AB Normal:
“I rely on the internet to earn money. It’s terrifying to think that suddenly I may not be able to conduct business online and/or lose a LOT of customers if Net Neutrality is rolled back. Things are already tough for me, this could ruin me.”

Troy Blackford:
“Eliminating Net Neutrality will help no one but service providers. It messes up the freedom that makes the internet revolutionary. Without these rules, Comcast could slow your Netflix to make you buy Hulu, and that sort of thing. Does that sound positive for customers?”

The FCC will vote on a new order to repeal net neutrality protections — Steve Wozniak explains why it’s so important #NetNeutrality pic.twitter.com/zA7mkdFkxH

When you realize the @FCC is trying to use Thanksgiving to sneak their voting about #NetNeutrality from the American people. pic.twitter.com/tAgmNJ2w5K

This is why we must have #NetNeutrality. We do not need #Talibangelist #evanhellicals, like @VP & his wealthy buyers, controlling the flow of information just so they, their “churches” & their jealous, misogynistic, racist, & petty war god can make obscene profits! #WWWResist⚡️ pic.twitter.com/ShkKbcwCss