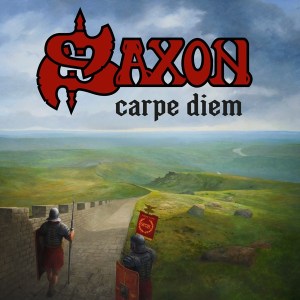 “Pilgrimage is a fantastic word,” says Byford, “People go on pilgrimages all the time, not just in a historical or religious sense, but it’s about going and visiting either a place that you feel is special in your life or somebody that’s meant something in your life. You can go on a pilgrimage to go see your great grandfather who died in the First World War for instance. They’re journeys of great weight and importance.”

Not resting on their laurels, SAXON have recently announced a string of UK dates to their SEIZE THE DAY WORLD TOUR:

*European dates soon to be announced

Produced by Andy Sneap (Judas Priest, Exodus, Accept and Priest guitarist) at Backstage Recording Studios in Derbyshire with Byford and Sneap mixing and mastering, Carpe Diem strikes the ear as one of the most essential British metal statements of the last few years and not lacking in pace or bite, an album which will ignite the joy in stalwart supporters and attract a whole new legion to the Saxon fold.

“Carpe Diem is the most self-contained, compositionally compact, solid, and strongest album for some time and a declaration of love to the classic British Heavy Metal. Go and get this record!” – METAL HAMMER

“With hard riffs, embedded in ‘liquid’ guitar melodies Saxon is presenting
their new songs within the sound of the 2020s. A lot of speed, energy and a bit aggression as well!” – GOOD TIMES

“Carpe Diem provides the listener a perfect equation into the chemistry that has made Saxon so successful for so many years. The riffs on the album demonstrate how bands like Metallica found Saxon to be so influential. – BRUTAL PLANET

“Carpe Diem by Saxon makes every minute count on this masterpiece of blazing metal music. This legendary British heavy metal band continues to create music that stays true to form, yet is vibrant and extremely satisfying” – METAL WANI

“Carpe Diem is a relentless breakout of traditional Heavy Metal. Even after 23 studio albums the brits can deliver metal of maximum quality” – METAL HAMMER

“Quick question – how does a heavy metal band survive for over 6 decades?
Answer – release albums like Carpe Diem, that’s how!!! – KICKASS FOREVER

“Seemingly unable to write a bad album even if their lives depended on it, Saxon deliver the goods once again” – GHOST CULT MAGAZINE

“Thanks to their view to the future, along with a fine sound production, made by Andy Sneap, the vision of Carpe Diem looks to me like a sheer success, a definite addition to the band’s grand legacy” – METAL TEMPLE

Carpe Diem Tracklisting:
Carpe Diem (Seize the Day)
Age of Steam
The Pilgrimage
Dambusters
Remember the Fallen
Super Nova
Lady In Gray
All for One
Black is the Night
Living On the Limit

All lyrics by Biff Byford. Backing vocals by Seb Byford