Robert Plant on Disbanding Led Zeppelin, “We knew that (John) Bonham was irreplaceable.” 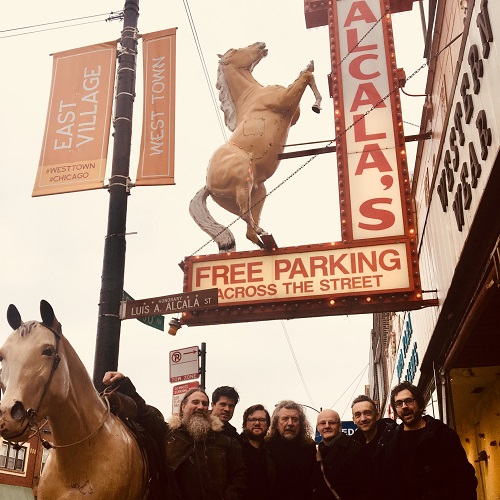 The Chicago Tribune recently conducted an interview with Robert Plant, who is currently wrapping up his 2018 North American solo tour.  A few excerpts can be found below.

The former Led Zeppelin frontman played in Chicago last night (2/20) at the Riviera Theatre.  View a recap of the show at this location.

On making the most of his remaining years, Plant said, “You’ve got to keep moving. I’m told you get a certain time in your life to do something and then after awhile maybe you just start repeating yourself….If there’s no creative renaissance then you don’t write new songs. And if you don’t write new songs then you must think about doing something else with the years that are left.” “Plus,” he adds with a laugh, “if I couldn’t do any of this anymore, I’d just be following my soccer team.”

Later in the interview, the soft-spoken singer recalls traveling to Bombay, India (now Mumbai) in 1971, with Led Zeppelin guitarist Jimmy Page, and being utterly inspired by the sights and sounds of the then-foreign land. “Page and I ended up there with a small orchestra with a two-track Revox tape recorder recording “Friends” and “Four Sticks,” he says referencing a pair of Zeppelin songs that appear on the band’s third and fourth albums, respectively. “Apparently we were the first European rockers to play in Bombay. We went to this club and I played drums, Jimmy played guitar. We did ‘Whole Lotta Love’ and other songs like that. It was all very fun.”

On Led Zeppelin’s legacy: “The reason that I feel strongly abut the beauty of Led Zeppelin and that other people do too is because we didn’t overblow it,” Plant says. “We didn’t end up getting a new drummer. We didn’t end up really going into super cliche characters lumbering along. If your heroes continue in the same vein forever the whole thing is just taken for granted and it becomes some dreary old Tin Pan Alley that needs some new blacktop. We knew that (John) Bonham was irreplaceable. By bowing out at the right time, we didn’t mess it up.

“Nobody in the band really knew what the hell we were about at all anyway,” Plant says with a laugh. “You can hear those Zeppelin songs and there’s quite a lot of naivete. I don’t think I’ve sang about Gollum or Frodo for about what seems to me about 47 years and yet still I’m castigated for it.”

Robert Plant is promoting his latest solo effort, Carry Fire, which was released on October 13, 2017 via Nonesuch/Warner Brothers. The self-produced eleventh solo album is the follow-up to 2014’s lullaby and… The Ceaseless Roar.