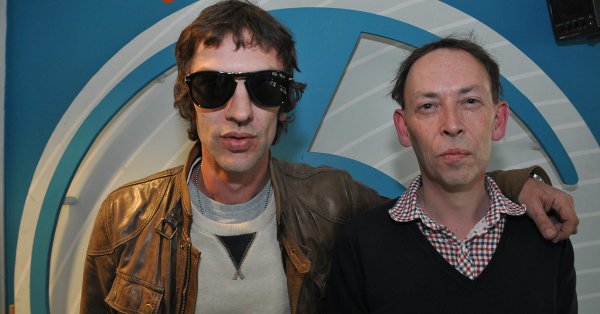 BBC 6 Music’s Steve Lamacq talks to vocalist Richard Ashcroft (located below) about the making of Urban Hymns, the third studio album by English alternative rock band The Verve. The critically-acclaimed album was released on September 29, 1997 and went on to become the band’s best selling release and one of the best-selling albums in UK chart history, eventually selling over ten million copies worldwide.

Richard Ashcroft formed The Verve (originally just Verve) in 1990 with Nick McCabe, Simon Jones and Peter Salisbury – guitarist and keyboard player Simon Tong was later added as a member. The band signed to Hut Records and became well known for their appetite for both psychedelic music and drugs.

Urban Hymns features the hit singles “Bitter Sweet Symphony”, “The Drugs Don’t Work” and “Lucky Man”. According to Billboard magazine, “the group’s rise was the culmination of a long, arduous journey that began at the dawn of the decade and went on to encompass a major breakup, multiple lawsuits, and an extensive diet of narcotics”

The album’s first single “Bitter Sweet Symphony” was marred by legal problems regarding ownership of the song. Although the group had secured permission from Decca to use a sample of 4 bars of an orchestral rendition of “The Last Time” by The Rolling Stones, giving 50% of the royalties to the original and named authors Jagger & Richards, they released the single without getting explicit permission from the administer of the song’s rights. When they retrospectively applied, Allen Klein, who administers the rights to the music via his company ABKCO Records, demanded 100% royalties and full publishing credits to Mick Jagger and Keith Richards.