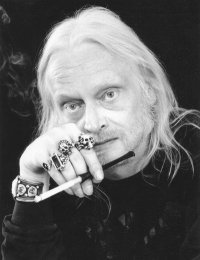 Manowar:
“It is with a heavy heart that we must share the sad news of the passing of one of the greatest of men. Our friend and brother Rainer Hänsel is no longer with us. His legacy will live on for ages, both in his life-long devotion to touring, record production, fun and music and in the hearts and souls of all the people who have had the pleasure of working with Rainer through the years, knew him as a man of integrity and a true friend to the end.

“He passed on peacefully in the way that he wished, in the home that he loved with his beloved dogs by his side. Please take a moment of silence to honor not only a legend in rock and heavy metal but one of Germany’s proudest sons.”

Molly Hatchet’s John Galvin:
“RIP Rainer Hansel. Rainer was the guy that believed in Molly Hatchet back in the 90’s and signed us to a German label, a relationship that’s lasted decades, and opened a whole new market for both concerts and recording for us. The timing couldn’t have been better. And, he was a bit of a metal head, which explains our heavier sound since then.”

Official Motorhead:
“We are very sad to report that our old German promoter, Rainer Hansel, has passed away. LEGEND, RIP.”

Saxon’s Biff Byford:
“Good friend Rainer Hänsel gone on to the other side had some great times together RIP biffx”