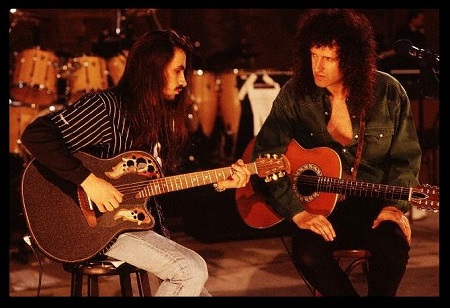 According to Nuno Bettencourt, his band Extreme will be releasing a new live DVD that will also include testimonials from other musicians; one of those being Queen guitarist Brian May. In the clips below, Brian talks about his love and respect for Bettencourt. The “More Than Words” guitarist recently spoke about the upcoming DVD and what it meant to him to have May acknowledge his playing, “I was told… Extreme is shooting a live DVD. What that does mean to me? Nothing. Why? Cause I’ll NEVER watch it. In fact I have NEVER watched ONE second of a live performance of myself. I’m talking from the club days to today on Instagram, Facebook or YouTube. I couldn’t think of anything more painful. I’m serious. I see seconds of it and start to cringe. I think god, what am I doing, I could’ve played that better. Jeez I look stupid. I just CAN’T. I prefer to remember the feeling I had that night. The memory. The audience. The energy. The second I look at it… that romance is over.

“Why am I confessing this to you… because I was told there were some testimonials on our new live DVD from some peers and some gods. Of course, so I wouldn’t burn my hands from touching the actual DVD, I had a friend rip ONLY those scenes and send the files to me. What I witnessed was emotional. I mean that, followed with disbelief, happiness and I admit a few tears. I mean what am I supposed to do when I hear THE Brian May, the guitarist and composer and singer for QUEEN. speak about my art. Fucking QUEEN… do you understand. There are influences, then there are THE ONES. who shaped you not only as an artist. But as a human being. Their art so powerful it affects who you become in life. Bypasses your ears and straight into your soul. Your childhood is hinged upon every song. Every lyric and melody. Every album. I admit I’m a bit uncomfortable sharing this as I don’t ever wanna brag about what I have done. If there is ever any greatness in any of us… it needs No ego. No announcement. It should speak for itself. So I’m not gonna brag… I’ll just let Brian May… do it for me. Forgive me. Fuck it. It’s ok to celebrate a bit, right. What have I done to deserve this.”