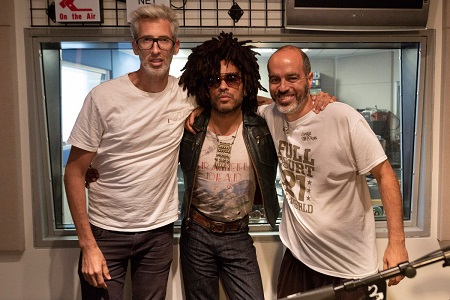 Lenny Kravitz joined NPR’s What’s Good for an in-depth conversation about growing up biracial in the ’60s and ’70s, his struggle to break into the music industry, and that one time he shared the stage with Aretha Franklin. Several highlights have been transcribed below. You can listen to the entire interview at this location.

On when he first learned what it meant to be biracial

I didn’t understand the whole race thing until I was probably in first grade. … My dad’s white; my mom’s black. I don’t think anything of it. My parents took me to school, it’s the first day of school, so everybody’s parents are walking their kids to school and everybody else’s parents matched except mine.

I remember this kid walked up to us in the hallway and he goes, “Your dad’s white!” And he pointed his finger. … That’s the first time that I understood something was going on.

I talked to my mother about it and she explained, you know, you’re this, you’re that, you should be proud of both sides of your heritage. One thing that she told me that was really interesting — and this is [when I was ] 6 years old — she said, “Even though you’re half this half that, society is only going to see you as black.” That was a very interesting thing to tell a 6-year-old. And then years later I understood what she was talking about.

On his encounters with Aretha Franklin

The first time I ever saw her was actually that night at the Jackson 5 concert in ’71 at [Madison Square] Garden. She was sitting near us and I remember her walking in and all the flashbulbs started going. People were like bugging out, and she had on this fur thing and a fur hat, and she just walked in like the queen that she is. Aretha Franklin records are really big on my list as an influence. Huge. The recordings, the songs, obviously her singing and her piano-playing. If she never opened her mouth she would be in my top three piano players. I loved the way she plays piano.

I got to sing a duet with Miss Franklin at Madison Square Garden for this Rock & Roll Hall of Fame thing. Rehearsals were really fun. Miss Franklin is very funny and always telling jokes and pulling gags and she’s just fun. She’s like your auntie, you know? But it was an honor to be able to spend some time with her.

On what he learns from his daughter, actress Zoe Kravitz

She’s way hipper than I am. I learn from her all the time. I mean, in fact, one of the songs on this album I re-cut because she didn’t dig the way I did it the first time. She’s like, “Nah, that ain’t it. It’s not right.” I completely changed the song, “It’s Enough.” She didn’t tell me to re-cut it, she just was like, “I’m not feeling it,” and, of course, I couldn’t stop thinking about it and then I cut it. And understood why it wasn’t right. Then I played it for her like way later … [and] she’s like, “Oh that’s much better.” She’s got great ears; she’s got great style; she’s got great instinct and she’s the new generation, so you know, I listen.

On paying tribute to black women in his music

You always got to pay tribute to the black woman. It’s powerful. Black women have been the rock for so long in our lives. They’re queens and they’re powerful. I was raised by a group of amazing black women. That was also the beauty of back in the day, back in Brooklyn. If my grandmother was at work or wasn’t around, you had Ms. So-and-so. And Ms. So-and-so would tear your ass up and take you back to your grandmother and explain what happened. People had jurisdiction. The neighborhood raised everybody. It wasn’t just your mom or your grandmother; the whole block was watching out.