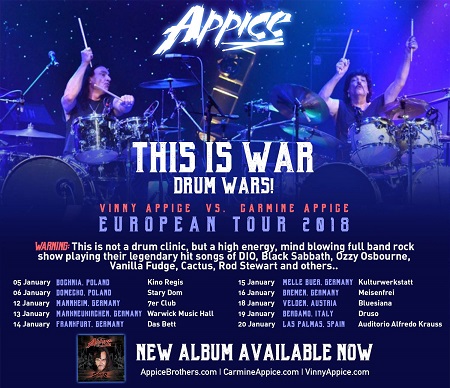 Brothers Carmine and Vinny Appice will embark on a European tour on January 5th in Bochnia, Poland at the Kino Regis. The 10-date trek will wrap up on January 20th in Las Palmas, Spain at the Auditorio Alfredo Krauss. A list of dates can be found below.

The Appice Brothers have conquered the rock world for decades and now join forces to conquer the world with their own rock show. Playing the greatest hits of their previous bands like Black Sabbath, Dio, Ozzy Osbourne, Rod Stewart, Blue Murder and more, the Appice Brothers deliver a rock show that will impress both rockers and drummers alike.

This show is not a drum show but a high energy, mind blowing rock concert with legendary songs, played with vehemence & power. Legendary rock drummer, Carmine Appice (Ozzy Osbourne, Rod Stewart, Vanilla Fudge, Cactus, and Jeff Beck to name a few), has enjoyed an amazing almost 50 year career as a rock star, music educator, author, and rock pioneer. He is widely considered to be one of the most accomplished showmen in rock.

Carmine is the recipient of numerous awards including Modern Drummer Hall of Fame, Hollywood Rock Walk of Fame, and dozens of gold and platinum selling records. Carmine co-wrote such monster selling hits as “Do Ya Think I’m Sexy” and “Young Turks.” He has broken new ground in every aspect of his career.

As a performer, as a teacher, and as a writer, he continues to inspire drummers and listeners throughout the world with his originality and his unwavering dedication to the art of drumming. In 2016, Carmine unleashed his book titled “STICK IT – My Life of SEX, DRUMS, AND ROCK ‘N’ ROLL”.

Vinny Appice’s unique, powerful drumming is marked not by his performances with a single group, but by his flawless musical contributions and drumming to an extensive list of rock and roll icons like Black Sabbath, Ronnie James Dio, Heaven & Hell, Rick Derringer, John Lennon and more!

A consummate performer and drummer, Vinny is also a brilliant clinician, performing clinics and master classes all across the globe, as well as making appearances in films and television. Vinny can be heard on classic albums like Black Sabbath’s Mob Rules and Dio’s Holy Diver & Last in Line.