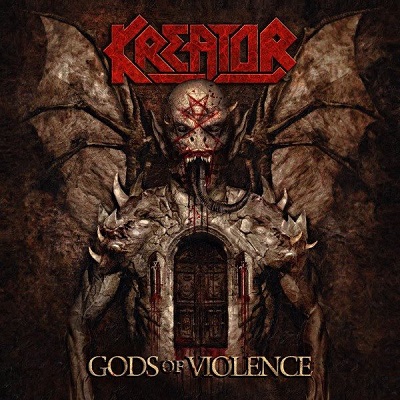 Amps: This is album number two with Jens Bogren (Producer). You and he seem to really work well together, like you get the best out of each other.

Mille: We click on a personal level. When we met him at first he wasn’t a KREATOR fan. Not that he didn’t like the band, he just wasn’t that aware of us, so he was very critical towards our music. But he’s like that with every band he works with, even the ones he likes. His studio is called Fascination Street because he comes from the goth scene and he’s a big goth rock fan. The first time we worked with him was different because we didn’t really know each other. And then, on this one, the humor was different, the vibe was different, and we had definitely gained more respect for each other. On the first one we were, not stiff, but I’ll say more careful.

Amps: Much like your peers in OVERKILL, TESTAMENT, ACCEPT, EXODUS it seems like you are doing some of your BEST writing at this later stage of your career. Why is that?

Mille: (Pauses for a moment) when you do this for so long sometimes you evolve and your personality changes and you grow as a person. You become aware that you’ve been doing this all your life, not just half your life. When you start out you don’t know how long this is gonna last. In the 90’s there was a time when everyone was trying different things and a lot of bands split up because metal was being ignored by a lot of people, so the scene kind of disappeared for awhile.

Once you become aware of, “OK, this is what I’m doing, nothing else” you want to do it right. I was always taking my music and my art very seriously. But the older you get the better you become as a musician. The songwriting skills change, and it’s always a new challenge to top your previous album, or at least try to make it as exciting. And that was probably always our thing.

Amps: How excited are you to be headlining this year’s Decibel Magazine Tour here in the U.S.? You’re here in Philly on April 15, Tax Day…I imagine a lot of metalheads will be out blowing off steam after getting screwed by Uncle Sam!

Mille: (Laughing) Oh, tell me about it! But yeah, we’ve never done a proper tour with OBITUARY. We’ve done some festival shows with them and they have always been friends of ours. We’ve seen the birth of OBITUARY in Tampa, FL. We’ve known the guys from way back, so this is gonna be a great tour and so much fun. And also MIDNIGHT and HORRENDOUS are really, really good bands, too.

Amps: What or who are you listening to right now?

Mille: I like a lot of the newer bands. TRIBULATION is one band that I really got into lately. The new METALLICA album (Hardwired… To Self-Destruct) is really good. So is the new TESTAMENT (Brotherhood of the Snake). That’s a really, really good album.

Amps: When you’re not writing and playing head-crushing songs in KREATOR what do you like to do away from music?

Mille: My free time probably doesn’t look much different than anyone’s. I go to the gym, I do yoga, I watch movies. I just saw one that really impressed me, Nocturnal Animals. You should definitely check it out. I read books, you know, typical free time stuff. I go to Barcelona because my girlfriend lives there, so I spend time there on the beach just hanging.