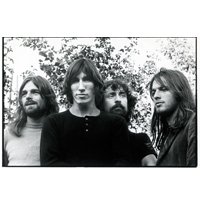 Interview with Pink Floyd´s longtime Designer and curator of “The Pink Floyd Exhibition: Their Mortal Remains” Aubrey Powell, speaking about the exhibition and his working with Pink Floyd.


Excerpt from the interview (transcribed by full in bloom):

“I remember the inspiration for Dark Side of the Moon very well.  I went to Abbey Road Studios to see Pink Floyd and discuss it with my partner Storm Thorgerson and the band said, “We’re kind of fed up with your surrealist covers.  Can’t we just have some simple, kind of like a chocolate box or something kind of thing…with a symbol.”  And Storm and I left the studio feeling rather depressed because it was not our style.  So, I was looking through a French physics magazine a few days later and in there was a picture of a glass paperweight on a table with sunlight coming through the window creating a rainbow.  And Storm looked at me and he said, “I have it!  It is a triangle with a white light creating a rainbow.”  We scribbled it on a piece of paper, I remember it was almost like a napkin you get in the restaurant.  I drew it like this, very roughly, with some crayons.  We took it straight up to Abbey Road Studios, showed the band and they all went, “that’s it, that’s it, that’s the album cover.”  That was it.  It was so simple…..

“No!  It’s not my favorite album cover. (laughs)  I most prefer to be honest with you, Wish You Were Here, with the man on fire…because I really set a man on fire.  The idea with Wish You Were Here was, the album was about absence and insincerity within the music business.  I thought, “What is better than to show a symbol of two business men shaking hands and one of them is being burned in the deal?”  And that is the symbolic meaning of that picture.  And then the Pink Floyd said to me, “How are we going to do that?” And I said, “I’m going to set a man on fire.”  So I went to Los Angeles got a stuntman who did fire stunts and we set him on fire.  And I was so lucky to get the picture.”