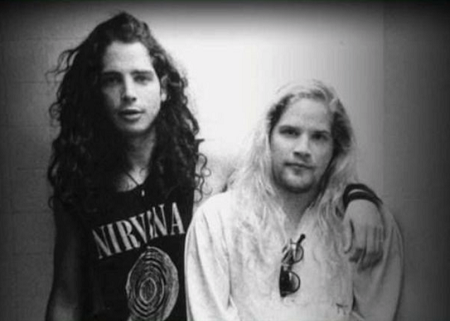 Soundgarden vocalist Chris Cornell was found dead last night, and, as of now, police are investigating his death as a suicide (UPDATED: medical examiner has ruled his death a suicide). The singer was reportedly found dead on the bathroom floor of his MGM Grand Detroit hotel room after Cornell’s wife had called a friend “and asked him to check on Cornell.” The suicide reports stem from the police telling the New York Times that “a white man whose birthday matches Cornell’s was found on a bathroom floor with a band around his neck,” however, they would not confirm his identity.

Personally, I am at a loss for words. One of my true…..and few heroes has left the building. The world has lost a piece of its integrity.

You’re a pillar of smoke, you’re a platinum heart

Your vision pierces, you do not see

You are pieces strewn on the hillside

You’re a revealer of visions, you’re the passenger, you’re a never fading scar

You’re a handsome groom, a loving father, a haunted stairwell

You’re the clear bell ringing, the mountains echo your song

Maybe no one has ever known you

You are twilight and star burn and shade”

Ladies and Gentleman
I would like to induct Chris Cornell into my personal Rock and Roll Hall of Fame
No one is ever prepared to hear about a death in the family.
And today Chris Cornell my brother from my Seattle music family is gone.
Devastating.
He was such an unwitting and reluctant BIG STAR.
Such a purist with a problem.
What we used to call “the Seattle musicians disease”.
Chris was among the greatest of Seattle’s most reluctant rock heroes.
Like Elvis Presley in the wrong decade, Chris was way too handsome and way too talented. He was never going to be a poster boy.
Instead, he raged and railed like all of us in the 90s against the blatant 80s commercialism and marketing with the pure Seattle punk guitar rock ethic.
We were not tan and squinting at cameras, just soul searching sequestered souls, indoors from the ever present blue Seattle rain.
From those basements garrets phosphorescent rehearsal rooms came the soul of a sound like no other.
The Seattle Explosion.
Chris Cornell’s astounding god gifted voice cut through all that thick grey weather like a sun bolt.
His beyond good looks and beyond talent were an embarrassment of riches.
I knew that was his big problem before I hardly ever had a chance to hang with him.
He was so moody, singular and complex.
From all accounts he was self absorbed and hard to love.
Like the best lead singers are required to be.
I thought he was judgmental of Heart since we had succeeded through a cultural system that he pushed against.
I thought his voice would forever grace the world of music.
But today the grey clouds rain tears.
And the tears taste salty.
Just like the ocean.”

According to @CNN the last song performed by Chris Cornell last night, was Led Zeppelin’s ‘In My Time Of Dying’ https://t.co/gvOfGC50BP pic.twitter.com/6Sl9MGkBzf

I love you, brother. Thank you for your friendship and your humor and your intellect and your singular and unmatched talent. It was a great honor to know you as a friend and as a band mate. I am devastated and deeply saddened that you are gone dear friend but your unbridled rock power, delicate haunting melodies and the memory of your smile are with us forever. Your beautiful voice and beautiful self will always be in my heart. God bless you and your family.

Sad to hear that my friend #chriscornell has passed away. A searcher of higher truth has entered the eternal hereafter. Prayers & love to his family

I love you, brother. Thank you for your friendship and your humor and your intellect and your singular and unmatched talent. It was a great honor to know you as a friend and as a band mate. I am devastated and deeply saddened that you are gone dear friend but your unbridled rock power, delicate haunting melodies and the memory of your smile are with us forever. Your beautiful voice and beautiful self will always be in my heart. God bless you and your family.

This is shocking and terribly sad news.Chris Cornell was not only an amazing musician but also a generous spirit that will be sorely missed. pic.twitter.com/sTcKKKqw0U

I’m very sad to hear about Chris Cornell passing. Especially when one is so young and talented. Love & Mercy to Chris’ family, friends, fans

Chris Cornell gone at 52, what a waste. One of my favourite singers and a lovely person, this news came as a complete shock. pic.twitter.com/T7aQ277Uos

Truly shocked by Chris Cornell’s passing. One of the greatest voices and nice bloke. RIP Chris.

Will miss the huge, true rock star talent of Chris Cornell. Always will be one of his biggest fans. Sending love to his family. #respect

Very sad news about Chris Cornell today. A sad loss of a great talent to the world, his friends and family. Rest In Peace. pic.twitter.com/BlgxE6cJLH

Shocked and saddened by the sudden death of @chriscornell. A great singer, songwriter and the loveliest man. pic.twitter.com/Hwdgst8kmg

So sad to hear Chris Cornell passed on. Way way way too soon. Sincere condolences to his family.… https://t.co/GnQLMXb1Im

Chris Cornell: INCOMPARABLE Singer; Songwriter; Family Man. ONE OF THE GREATS. Turn this up: https://t.co/2hZJ4tjxkg pic.twitter.com/uKFWAOELeK

Shocking news Chris Cornell passing last night in Detroit. Brilliant artist on so many levels. I am in shock. My condolences to his family.

Extremely shocking to hear of Chris Cornell’s passing. He was one of the greatest rock singers to ever picked up a microphone.

STUNNED to hear the death of Chris Cornell. Music’s loss. Greater still, his family has lost a father&husband. RIP. https://t.co/5NGC2YCcz1

Devastating news about Chris Cornell One of the greatest voices in rock . My thoughts and prayers go out to his family and close friends

SO SO stunned to hear about Chris Cornell! Such a terrible and sad loss! Thinking of his family tonight! RIP

He was a solid guy.Always kind and personable to me.If we played a show somewhere he always made… https://t.co/X1EPZNViRS