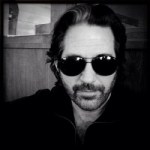 Message to my friends in Emmett, Idaho. 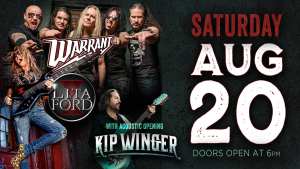 Warrant
At its core, WARRANT is an American rock band through and through. Hitting it big in 1989, the Hollywood, CA based band rose through the ranks of the local Sunset Strip scene to the level of multiplatinum selling, chart-topping success. The band first came into the national spotlight with their debut album Dirty Rotten Filthy Stinking Rich. This album produced Radio and MTV chart toppers “Down Boys,” “Sometimes She Cries,” and the massive hit “Heaven” which reached #1 in Rolling Stone and #2 on the Billboard Hot 100 for two weeks in a row. The single “Heaven” enjoyed Gold sales and the Album went Platinum in Canada as well, eventually selling over 3 million copies. The band toured the globe performing 262 shows in support of DRFSR and closed the year with a Platinum Home Video. WARRANT’s sophomore album Cherry Pie was released in September 1990.

Lita Ford
Lita Ford’s career began in 1975 as a founding member and guitarist of the groundbreaking all female group the Runaways. The groups hard rock / punk edge spawned hits like “Cherry Bomb” and “Queens of Noise”. Lita and the Runaways proved their timelessness in 2014 when “Cherry Bomb” was featured in the critically acclaimed Marvel / Disney Studios hit movie “Guardians Of The Galaxy” and was nominated for a Grammy Award.

Kip Winger
As the lead singer and bassist of the band bearing his last name, Kip Winger rode the ’80s pop-metal explosion to short-lived stardom, before beginning a solo career in the late ’90s. A native of Denver, began taking music lessons as a young child and dropped out of high school after tenth grade to pursue music as a career. He studied classical guitar and moved to New York with his then-current band seeking a record deal; when one didn’t materialize, he returned home and obtained his GED in order to study music at Denver University, simultaneously taking ballet classes from the Colorado State Ballet (which he joined for a time). returned to New York in 1982, and through his contact with producer Beau Hill (another Denver native), he began landing songwriting work.

Audience and selfie drum solo footage from the hit last night at Stoney’s Road House near Boise, with Lita Ford. A spirited crowd, for sure! pic.twitter.com/EaGAycVYBu

Back at it again this weekend with Lita Ford and co:

After a short break, hitting the stage again tomorrow in The Dalles, OR with @WingerTheBand & @WarrantRocks!

And a couple of solo shows next week – Gatlinburg, TN & Emmett, ID!

Previous: W.A.S.P.’s Blackie Lawless Waiting for KISS Guitarist Ace Frehley at the Sunset Marquis in 1976
Next: MTV’s Riki Rachtman Tours Cathouse Hollywood as it is in 2022: “Stephen Pearcy from RATT told me he used to like doing cocaine in there” – VIDEO