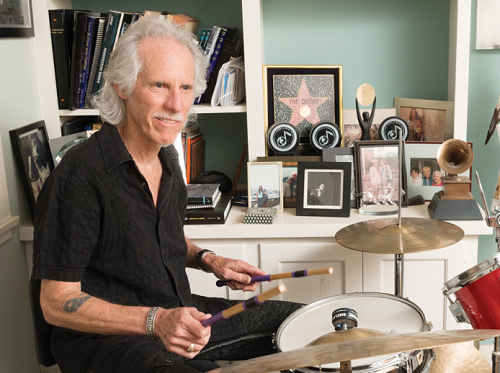 On November 29, 2017, a newly created company called Seminal Media purchased L.A. Weekly and almost immediately fired the entire editorial staff, with the exception of one writer. The transition prompted former digital editor Keith Plocek to post a response. Titled “Who Owns L.A. Weekly?,” Plocek says, “The new owners of L.A. Weekly don’t want you to know who they are. They are hiding from you. They’ve got big black bags with question marks covering their big bald heads.” Read the entire statement on our previous post at this location.

Today, John Densmore, former drummer of The Doors, voiced his opinion on the alternative newsweekly’s new ownership. Densmore said, “I grew up reading the LAWeekly. It fed me with its progressive ideas. To read the paper has been bought by conservatives in Orange County, and most of the editors subsequently fired – is disturbing, to say the least. I didn’t get paid for my latest article (Standing at the Crossroads: Morrison & Densmore), and I don’t need the dough. It did, however, make me think about all the struggling writers — I stand in solidarity with them, and with the ideals and principles that the Weekly once stood for.”