Steve: Well, I’ve got a new band, called Hatriot, to spew onto the world.

FIB MUSIC: Do you live in Oakland, CA now?

Steve: Close to Oakland. I live in a county that’s about fifteen minutes away from Oakland.

FIB MUSIC: Did you ever live in San Francisco, or have you always lived in Oakland?

Steve: No, I’ve always lived in the East Bay….I don’t claim to be anything with San Francisco…..beautiful city, can’t stand their sports teams….I’m an Oakland guy – Raiders, A’s. I was born in the East Bay.

FIB MUSIC: Tell us about your new band.

Steve: Well, I started it a couple of years ago with Kosta Varvatakis….we write all the songs. He writes all the music and I write all the lyrics. We just slowly pieced together the ultimate Bay area thrash band. We’re really excited about the songs we write. It’s in the vein of thrash and in the vein of what I would do. People were asking, ‘What’s Steve going to do next?’, well, kind of stay in what I’ve always done. Exodus / Legacy-type thrash metal. Hatriot conveys a lot of that….there’s a ton of Exodus and Legacy overtones in all the songs. Even some of the songs that you haven’t heard that are newer songs, very much so in the vein of Bay area thrash.

FIB MUSIC: The new songs sound great. Are you guys self-financing the recordings? How are you doing it these days?

Steve: Well it’s not a record, it’s just kind of a demo. We kind of use our resources as we use them. Knowing people over the years and there are new guys coming up that want to make a name for themselves that might be able to do it less expensive….because the music business is what it is people are more willing to do it. We kind of pay for it ourselves…..I should say myself…..I pay for it all myself.

FIB MUSIC: Do you have your own recording studio or are you still going into studios to record?

Steve: I do go into a studio. But there are so many at my disposal, so many people I have met over the years, studios I’ve recorded in, places I can go in for pretty much dirt cheap and do these recordings. Also the musicianship in the band is really stellar so it’s not a lot of time we take doing it. Alex Bent (drummer) is like first-take-Jake, everybody is for the most part. Everybody comes prepared so it doesn’t take long. We rehearse twice a week.

FIB MUSIC: I noticed that your son is in the band.

Steve: Yeah, my oldest boy Kody (Souza), he’s the bass player. I threw him a bass when he was thirteen…..I bought a bass off of Jack Gibson (Exodus) and said, ‘here it is, learn it’, it was a 5-string ESP and he can play the shit of it now. I actually made him audition for Hatriot. I didn’t go, ‘ok, you’re my son, you got the gig’. I said, ‘you got to play with those guys first and if they like you, you got the gig’, he was like, ‘really’. He’s really good. All the band members are, they are all quality musicians and very into their craft.

FIB MUSIC: Have you been playing out at all?

Steve: Yes. We’ve done four or five shows, we’ve played with Testament, Forbidden, we’ve got a headlining show coming up on the May 19th, we’re playing with D.R.I on the 31st. You can see us if you look for us…..you know, you can’t just go crazy like you used to do in the old days where you play every weekend and play everyone’s pizza palace. There’s not the venues to allow you anymore. I’m also pretty picky with this band; I only want to do shows where we’re presented in a good light. Fortunately I have been given those. Now I’m ready to shop the band, I’ve done a lot of press, I want to bring the band in the forefront. I want to do a record….we’re actually talking to a few labels right now, so I should be signed soon and recording a record this summer and have something out by fall, or early 2013….that’s what I’m shooting for.

FIB MUSIC: What’s the benefit of being signed to a record label nowadays? It seems that if you have any kind of name in the industry that it would be better just to release it on your own.

Steve: Signing with a label just makes it more accessible. It’s in your face. We did the Dublin Death Patrol record on our own and I still thought if you have a label it really helps with the distribution. There are a lot of people outside of the United States that don’t download all the time, they want to have the packaging in their hands. To get it to them, you have to have that. A record label can get you that, plus everything else. I still think they’re important.

Steve: Not really that great. There’s a great club in Santa Clara called Avalon…I hear that it’s closing at the end of the year but it’s a beautiful club and that’s where everyone that’s coming through plays. There’s another club in San Francisco called the Regency Ballroom and they’re getting mid-size shows, 1000 to 1500 capacity. Then there’s the Fillmore, it can hold about 1500 to 2000 and the Warfield takes everything after that. There’s little clubs like the Independent and we’re playing a place called the Rockit Room, which is new. It’s not like it was back in the day but I guess you can’t expect it to be. It’s a bit of a let down compared to that.

FIB MUSIC: That was my next question. You guys came up in one of the most historical music scenes ever, that Bay area thrash scene. What was that like?

Steve: Oh man, when we were doing it back in the day, it was flourishing. We didn’t realize how good we had it, now that we look back. Now, there are no shows during the week. Shows are only on Fridays and Saturdays and they’re not every Friday and Saturday. Where back in the day, there were shows on Mondays, Wednesdays, Thursdays and definitely Fridays and Saturdays….you could count on that…..maybe even a Sunday in there. Here’s a typical show: July 1985, Ruthie’s Inn, Legacy, Suicidal (Tendencies), Mace, Death Angel. In the crowd, every member from Metallica, every member from Exodus, every member from Vio-lence, every member from Forbidden, every member from any of those bands you could think of were in the crowd because that was our scene. At the end of that night, PARTY at some place ’til 4, 5, 6 in the morning, RAGING, getting hammered, getting drunk, doing whatever we did back in those days. That was typical. You look and say where’s it going to next weekend and where’s it going to be the weekend after that…..wait a minute, there’s a show Sunday, really?, yeah, it’s Death Angel and Blind Illusion, they’re playing down by the water at 5 o’clock. Then there’s a show on Tuesday at Ruthie’s, then there’s Metal Monday at the Old Waldorf. Oh yeah. At the time, my take on it was, I guess every city does this, right? Then as we got older and we got signed and started touring, and all of our bands started becoming well known bands and thrash became a whole genre….it was like wow, I guess every city wasn’t like this.

FIB MUSIC: Were you playing down in Los Angeles during that time?

Steve: Oh sure. I remember we went down there in ’85 and played with Anthrax, Abattoir and us (Legacy)……who else….it was MMM, Mike Muir (Suicidal Tendencies) Music Presents, he was the promoter on it. It was like Dark Angel, us, Abattoir, somebody else, and Anthrax. So we did go down there from time to time but for the most part everybody knew that thrash was here and we didn’t have to go anywhere. Those venues in Berkeley, the venues in Oakland, venues in San Francisco, there was a venue in Palo Alto…..they were everywhere, so we didn’t stray too far from the scene.

FIB MUSIC: It must have been amazing to see all those bands from San Francisco, including your own, go from local acts to national acts.

Steve: Oh man, Metallica. I remember when Cliff (Burton) used to drive this little old, green Volkswagen, beat up Bug….that was Cliff’s car….and even then we looked at those guys like they were gods….and they didn’t have any money. I remember going to the Metallica house in San Pablo, where Lars (Ulrich) and James (Hetfield) lived and they would just have these outrageous, killer parties after gigs. They were just guys in the scene. They were at every show. You’d see all the Exodus guys, all the Legacy and Testament guys, all the Death Angel guys, all the Possessed guys, the Forbidden guys, the Vio-lence guys……uh, Mordred, you can just keep going and going. At one point you would think that there were more of those guys in the crowd, than there was actually crowd. 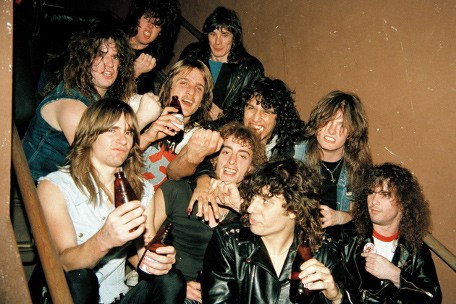 FIB MUSIC: What about Slayer? Were they a big part of that scene?

Steve: Sure they were, because they came up in like late ’83, or early ’84. They played with Laaz Rockit. I remember they used to wear black circle makeup around their eyes. I remember later that night, at the party in Berkeley, (Paul) Baloff threw their television out the window, the one in Slayer’s room…..that was great….that was an awesome party….back in the day it was like every hotel for itself.

FIB MUSIC: Paul just took their tv and threw it out the window?

Steve: Yeah, they had rented rooms at this hotel that was just down the street from Ruthie’s Inn and it’s where they ended up having a party after the gig. I remember Baloff just tearing the tv, you know where they have the tv on a stand and it’s locked down….he was just sweating, tearing the tv off the stand and throwing it out the window (laughs), from the second floor onto the parking lot. That’s the kind of mayhem that went on. We thought we were invincible. 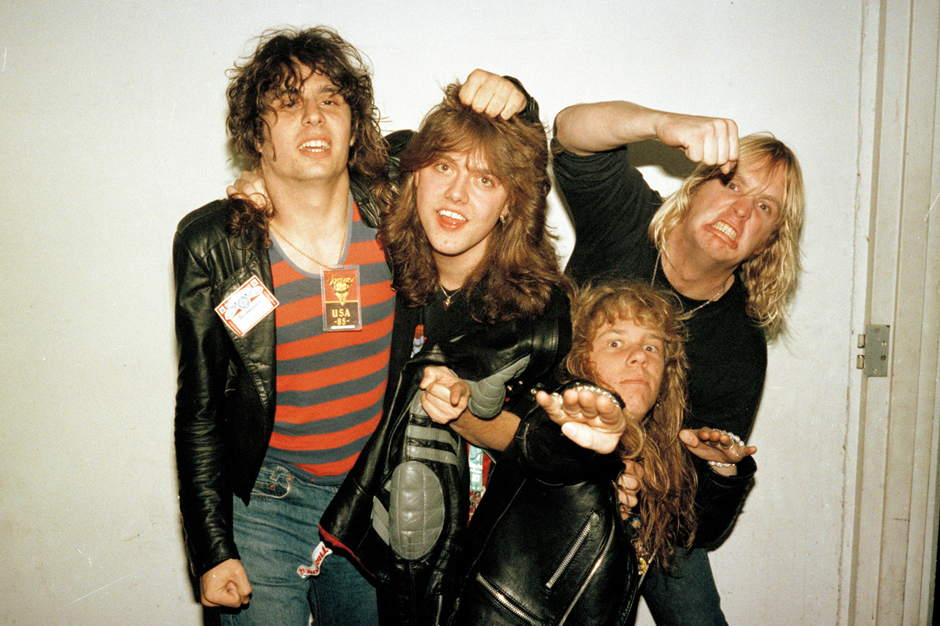 FIB MUSIC: It was Slayer and Metallica that took off first, right?

Steve: I would say that Exodus ‘Bonded by Blood’ was in there as well. I joined the band after that record….coming out of the gate, there wasn’t anything stronger. I remember two months before I joined Exodus, I remember going to go see Judas Priest at the Cal Expo and for some reason we parked right where all the cars were coming in to pay. I guess cause when the show ended, we didn’t want to have to wait to get out of there. But every fucking car that pulled in there was playing ‘Bonded by Blood’, every single fucking car that pulled into that lot was playing ‘Bonded by Blood’…..and this band wanted me? Hell Yeah.