Ice-T recently spoke to Playboy about Body Count’s new release, Bloodlust. Body Count is Ice-T’s hardcore metal band that originally formed in 1991. The group gain most of its notoriety in 1992 when they released their self-titled album featuring the song, “Cop Killer”. Ice-T calls the song a ‘warning’ to violent cops, “If you motherfuckers continue this behavior, somebody might go after you.” Ice-T also talks about Body Count’s cover of Slayer’s “Raining Blood” (one of my all-time favs).  Here are some highlights from the interview:

You’ve said music happens in specific climates. Do you see a parallel between today’s climate and the one in which Body Count originally came to life?
Body Count happened in the Bush era. It also happened during the [Rodney King] riots and all that stuff. But I think people back then were more in touch with what was going on, so they were easily brought to their feet by groups like us, like Public Enemy, like Rage Against the Machine. But this new generation is delusional. They came up in the Obama era; they’ve never been through any real roughness, so it’s like they’re just waking up to it. They’re like, “Oh my god, politicians are bad!” [Laughs] Yeah, motherfuckers—they lie! 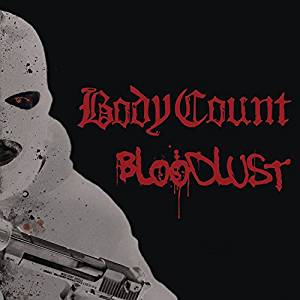 You covered Slayer’s “Raining Blood.” Did you pick that song because it fits the Bloodlust theme?
Absolutely. We played it in a rehearsal, just fucking around, and we Periscoped it. People went batshit crazy for it, so we were like, “Should we put that on the album?” Then we did a show in Arizona where we just opened with that, and the crowd went crazy. So we knew we needed it in our repertoire, and I did that little intro on the album where I mention Black Sabbath and Suicidal [Tendencies] and Slayer, because I think Body Count is a hybrid of those three groups. Then you add my gangster sensibility and lyrics that come more from the street.

The song “No Lives Matter” obviously has to do with the division between the Black Lives Matter movement and those who say all lives matter.
I tried to break it down as simple as possible. I’m not a member of BLM, but I understand what that statement means. When people say “All lives matter,” they’re missing the point. We’re not saying that black lives are the only lives that matter. We’re just saying they have to matter. But in the song, I’m saying they never really have. But then take it another step: When you get to the bottom of evil, they don’t give a fuck about any-fucking-body. There’s a good documentary called Shadow World, where they’re talking about selling weapons. When you’re playing on that field, humans are just collateral damage to the money. So I’m saying black lives should matter, but motherfuckers don’t act like they do.

You’ve said you feel like the issue is more about class than race, though.
It’s a lot more about class than race, and I truly believe it. There are racists out there—don’t get it fucked up—but a lot more is going on than just racism. That’s what the song is about. Like on my show, Law & Order, they go, “They’re from an affluent family, so tread lightly.” What are they saying? They’re saying we can’t fuck with them. So I think when the cops are in the projects, their hands are quicker on the trigger because there’s gonna be no ramifications for their actions. If they’re in Beverly Hills, they’re not gonna pull that gun. That’s in the back of their minds.

But black cops are fucking up, too. They’re out there shooting motherfuckers. So I’m just here to say it’s deeper than racism. Black lives should matter, but they don’t give a fuck about poor whites that they call trash, either. One thing I’ve always tried to do is let white people know that black people ain’t the enemy, and let black people know that all white people ain’t the enemy. There’s suckers of every race, color, and denomination. You’ve gotta judge a devil by his deeds, not what they look like.

There was a huge controversy when Body Count came out with “Cop Killer” in 1992, but the sentiment behind it seems more relevant today than ever. Do you think of that song as timeless?
Yeah. “Cop Killer” was a warning record. It was saying, “If you motherfuckers continue this behavior, somebody might go after you.” And it recently happened. I did the same thing on this new record with “Civil War.” Civil war hasn’t happened recently, but it can happen. And if these motherfuckers don’t address these situations, then it will pop off.

Last but not least, were you surprised that Trump won?
I think we all were surprised that Trump won, because dude be lying. He’s a motherfucker. He didn’t never show his taxes. He’s the ultimate con artist. He’s the kind of rich person, when people say they don’t like rich people—that’s what they mean. I know Richard Branson, I know Mark Cuban—billionaires that you can sit up and kick it with. But Trump is an elitist. He’s a demagogue. And yeah, it’s scary, man. He’s got a lot of power. I come from the gang world, you know. You can’t just be talking shit and think the other gangs don’t hear you. You can’t talk the way he talks and think the rest of the world doesn’t see him as their enemy. Once the dude told the world, “I’m smarter than the generals,” I knew we were up shit creek. But I predict his own supporters will turn on him in six to eight months. So let’s just cross our fingers.

You can read the rest of the interview at this location.

Previous: Yngwie Malmsteen on Why He Uses a Scalloped Fret Board
Next: Ringo Starr, Paul McCartney and Joe Walsh in the Studio