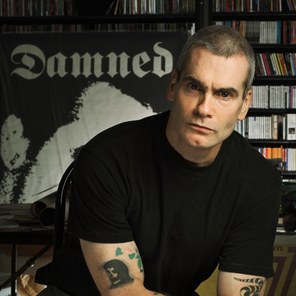 Henry Rollins will be filling in for Iggy Pop on his BBC Radio 6 for the next two Fridays.  The former Black Flag vocalist will sit in for a two hour selection culled from his vast record collection.The show airs at 7PM in the UK, in the U.S. – 11AM on the west coast, 2PM on the east. You can listen at this location.

Henry Rollins hosts his own radio show on KCRW. This Sunday night on KCRW, Rollins will be live with Shepard Fairey.

Henry Rollins posted the following: message on his website:

“Hello BBC Radio 6 listener and fellow music enthusiast. The Undisputed Heavyweight Champion of Rock and Roll is taking a couple of Fridays off, so I’ve been called upon to step into the breach and supply what will hopefully be some great Friday evening listening. Mr. Pop puts together a good radio show. Hopefully, I can make merit.

“I’ve seen Iggy play five times this year! In March, I went down to Mexico City to watch him and Metallica do three shows in the Foro Sol. Over sixty thousand people a night. It was cool to see how much people dug Iggy and the band. I watched all three from the soundboard. The stage was truly massive, with the runways, huge back screen, multiple camera angles, etc. I found myself straying and watching the screen more than the band, who were dwarfed by the sheer size of the whole thing. The band played great and Iggy was in perfect voice all three nights. I went to see him play in Las Vegas a few weeks ago and that was cool and most recently, saw him at the FYF fest in Los Angeles. Ty Segall went on before Iggy and totally killed it and then Iggy. It was a perfect twofer. It’s always worth seeing Iggy. There’s something about hearing him do songs, like Lust For Life, where it hits me.

“Let’s take a look at what’s on, then. We start with a Ramones tune from their 1983 album, Subterranean Jungle. I was too broke to get it when it came out. In those days, I was like I am now—rabidly curious about music. I wanted to hear everything but was low on finances, so I would find people who had interesting record collections and make tapes. When I had heard a record a few times, I would tape something else over the previous recording and keep listening. In those days, I was living in a van and there was very little room. I would go to used record stores whenever I could. Often, the cheapest records were Blues albums. I had a rudimentary knowledge of the genre but for the most part, bought the ones with the coolest covers. If we ever crashed at someone’s house who had a record player, I would listen to the records I had found. It was a chore trying to keep the records from getting destroyed while on the road but I eventually got them back to the room I had in Redondo Beach. At the end of 1986, I was living in Leeds for a few weeks, working on a record. We had a copy of Subterranean Jungle at the flat, which we played all the time, and that’s where I connected with it. The track we’re listening to features Dee Dee on vocals. I always liked it when he sang. A few weeks ago, on my show on KCRW FM, I had the man who signed the Ramones (as well as Madonna) to his label Sire, the legendary Seymour Stein. His stories were amazing. At one point, I asked him if he had heard the new mono mix of the first Ramones album that just came out. He said he hadn’t. We put Blitzkrieg Bop on. Mr. Stein started singing along. Everyone in the studio stood and watched. Knowing that Joey, Dee Dee, Johnny and Tommy are gone, there was something full circle about seeing the man who put out the first Ramones singing one of their songs. I’ll never forget it.

“One of the things that obsesses me about music is the sheer amount of information that can be attached to a band, album or a song. Seymour told a story about Johnny Ramone calling him and asking him to come to CBGB to hear their new material. Seymour went and while standing outside the club, waiting for the Ramones, heard the opening band playing inside. He said the music sounded so different, so great, it pulled him into the club. He signed the band. The Talking Heads. What a story! I live for this kind of thing.

“I’ve been thinking and writing a lot about vinyl and the physical aspects of it, playing records, storing them, etc. There’s nothing easy about it, which I actually like. Just an observation: when you’re young, male, and into records, this can be seen as a stage that once you get a life, you will grow out of. What if you don’t grow out of it? I am pushing sixty. I’m more into records and music than ever. I just got the new Oh Sees album, Orc, in five different color configurations. I will listen to all of them, of course. Actually, I’m already through three. If I was nineteen, this could be chalked up to youthful obsessive exuberance—an antic! At my age, it’s just, wow.”