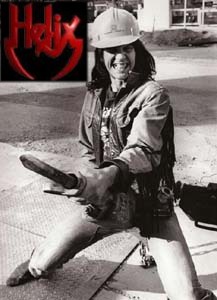 Brian Vollmer: Last year we released 3 CDs and 2 DVDS. One of the CDs (30 Years of Helix) was on E.M.I. as was the “30th Helix Anniversary Concert” DVD. We also released our own anniversary CD entitled “NEVER TRUST ANYONE OVER 30” and our first full studio CD in 10 years: “Rockin’ In My Outer Space.” In December I also put together a Christmas CD to help raise money for my church. That CD was called “Raisin’ the Roof on Mary Immaculate” and sold out in a few weeks, raising over $8,000. It’s now out of print. This fall I’m going to be recording a cover album of Canadian songs called “Many are Cold but few are Frozen” and another classical CD under my own name. As well as that I’m looking forward to releasing my autobiography “Gimme an R!” and starting to write the next studio CD.

full in bloom: You guys recently played the Sweden Rock Festival. Who else was on the bill and what are some of the highlights?

Brian: What a great festival! Over 26,000 people a day. Some of the bands included Motley Crue, Accept, Motorhead, Status Quo, Sammy Hagar, Motorhead, Sebastian Bach, Kansas, Styx, etc. etc. etc. I think there were 30 bands in all. The highlight of the weekend was of course our show. Other than that I would say riding back from Ronneby, Sweden to Copenhagen, Denmark at 5A.M. with Sebastian Bach sitting beside me was an experience I’ll never forget. Especially seeing as he hadn’t gone to bed the night before.

full in bloom: What kind of reaction did you receive from the crowd? Did you have an encore? What was the set list?

Brian: Swedish fans have been waiting a long time for us to come back. We had a number one album there in 1985 with “Long Way to Heaven,” but we really established ourselves there right from our first E.M.I. album No Rest, when we toured in support of Kiss on the Lick it Up Tour. The set was a combination of our hits plus a few songs we haven’t played in awhile with a couple of new tunes thrown in for good measure. For our encore we played “Bend Over Kiss Your Ass Goodbye.”

full in bloom: On your way to the festival, you traveled by way of London. How soon after you guys left, did the bombings occur? Did you use the Aldgate Station, or the King’s Cross Station, where the bombs went off?

Brian: We stayed in England before and after Sweden Rock Festival. We used both King’s Cross and Aldgate. We actually stayed with friends who live very close (a couple of blocks) from Aldgate Station. I think we had only been home for two weeks when the bombings occurred.

full in bloom: How close are you to having your autobiography published? What is the current news behind that?

Brian: My autobiography is now done. (at least my part is). I’ll be taking it to a publisher sometime in the near future.

full in bloom: Did you write it yourself, or did you have some assistance? 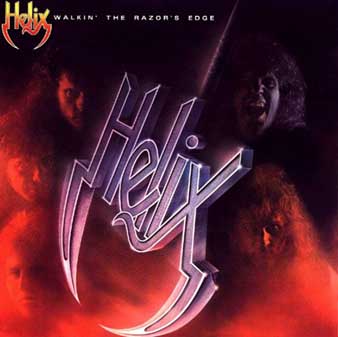 full in bloom: What are some memories of the recording sessions for Walkin’ the Razor’s Edge?

Brian: One of the many memories I have from that session is driving overnight to Atlanta, Georgia to do the mixes with Rodney Mills. He made a big difference in the overall sound of that CD.

full in bloom: How many copies of that were sold worldwide?

Brian: I dunno. The album is certified platinum in Canada but worldwide I have no clue.

full in bloom: Who were some of the bands you toured with on that album?

Brian: We toured Europe with Motorhead, Girlschool, and Mercyful Fate. In the States we played on the Whitesnake / Quiet Riot tour, and in Canada with Triumph.

full in bloom: How excited was the label about the song “Rock You?” I still have a memory of seeing the video and buying the album the next day. That was quite an infectious song.

Brian: The Canadian part of the company was very excited. It’s hard to know what the American part thought because they fired most of the guys at the top of the company just as the song was getting airplay.

full in bloom: Why did it take so long to get No Rest for the Wicked re-released? How does the licensing process work? Tell us about your deal with Rock Candy Records.

Brian: Licensing is a process whereby anyone can “rent” or “license” the masters from the owners of the masters (in our case E.M.I.) and print and sell them. I don’t know what Rock Candy’s deal with E.M.I. is. We get paid through publishing money which is paid by Rock Candy on the # of units pressed.

full in bloom: What is the benefit of signing with a record label, or having another label license your product? Since Helix has name recognition, wouldn’t it be more beneficial to have licensed your earlier releases yourself?

Brian: The benefit of signing to a label is money. Big record labels have the thousands of dollars needed for studio time, top producers & engineers, etc. Most bands do not own their own masters in the beginning.

full in bloom: How do bands like Motley Crue and W.A.S.P. obtain all the rights to their music?

Brian: You’ll have to ask them.

full in bloom: Is your royalty rate better now than it was with EMI? What was the rate when you were signed with EMI?

Brian: I don’t disclose personal business info ie. what my royalty rate was with E.M.I. I will tell you what I make nowadays though. My normal budget on my CDs is around $10,000. It takes about 1,000 units to break even. After that I make about $18.00/unit.

full in bloom: I still remember reading an interview long ago and you saying that you listened to Bon Jovi albums over and over while writing your album. What release were you working on and why Bon Jovi?

Brian: I don’t remember ever saying that. 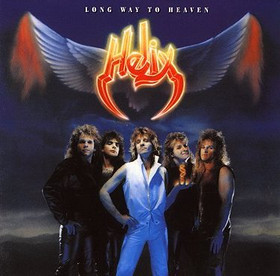 full in bloom: What are some memories from the Long Way to Heaven recording session? What was your reaction, after hearing the final mix of “Deep Cuts the Knife?”

Brian: Can’t remember, but we all thought the song was a hit.

full in bloom: How many copies of Long Way to Heaven were sold?

Brian: Dunno once again. It was certified platinum in Canada however and went to number one in Sweden.

full in bloom: Did you guys ever receive payments for royalties, or were you always recouping?

full in bloom: I have heard that bands don’t make money from touring, only hoping to break even. If bands never make money on sales, then how is it that they make anything at all?

Brian: Easy-most bands don’t make money. Nowadays I do, because I run things myself. I know where every penny goes.

full in bloom: Was anything left over after the Long Way from Heaven tour?

Brian: Any money we made at that stage of our career went straight back into the band. We each took a very moderate wage of $200/week. Re-investing in ourselves helped us survive the lean years which were to follow. 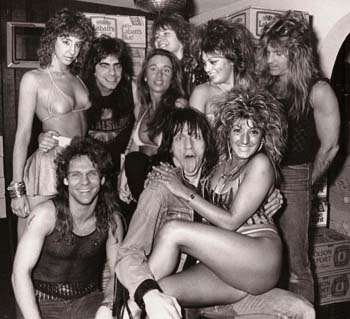 full in bloom: Collectively, how many Helix albums have been sold?

full in bloom: What year did you part ways with EMI?

Brian: Our relationship with E.M.I./Capitol ended in 1993. It was a low point for the band and one of the hardest periods in my life.

full in bloom: What year did Helix tour with Ian Gillan?

full in bloom: Did he play any songs from the Black Sabbath, Born Again album? Or did he only play songs from Gillan?

full in bloom: What was he like to tour with?

Brian: He was the greatest. Very accessible and friendly. I watched him almost every night front the side of the stage. Our show together at the Moulin Rouge in Paris and also our show in Luxembourg stick out in my mind.

Brian: I would have learned to play an instrument earlier in life.

full in bloom:What is your most disgusting habit?

Brian: Talking too much.

full in bloom:What is the most feminine thing you do?

full in bloom:If there is a God, what is the first question you would ask God when you arrive?

Brian: Why he loves me so much

full in bloom:Greatest Rock band of all time?

full in bloom:What were you doing 40 minutes before you sat down to do this interview?

Brian: Practicing on my new piano