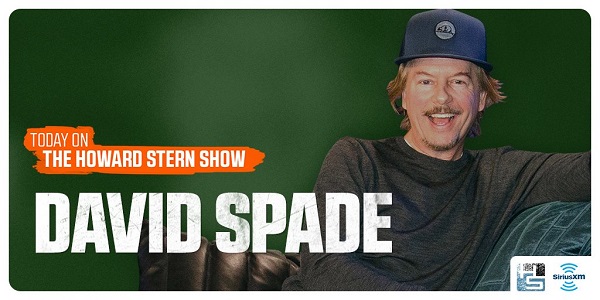 David Spade stopped by the Stern Show today, July 18th, to talk about his new audible book, A Polaroid Guy in a Snapchat World, which comes out on Thursday and covers his career, personal life, and stance on social media. Excerpts from the interview have been embedded below.

During David’s last visit with Howard in March, he talked about going head-to-head with internet sensation Danielle Bregoli, who now goes by the name Bhad Bhabie, but is probably best known as the “Cash Me Outside” girl from her famed appearance on “Dr. Phil.” After running into each other out in public, the two posed for a selfie together which Spade later put on his Instagram with a caption poking fun at Danielle’s fleeting fame. Little did he know the fledgling rap star has quite a fervent online following.

“She has 10 million followers and I have a million. I go, ‘Well, maybe she’s more famous if you go by facts!’” David joked to Howard during his last Stern Show appearance.

Spade is also starring in a new movie out on Netflix later this week called Father of the Year, produced by his old buddy and fellow Stern Show regular Adam Sandler. David plays a dysfunctional dad who reconnects with his son albeit with some bumps, bruises, and body slams along the way.

Check back, excerpts from the interview will be posted below.