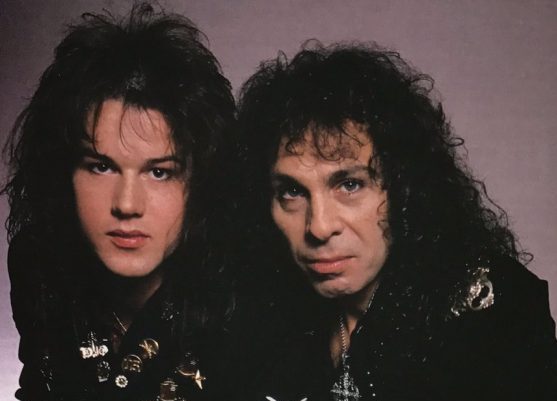 It’s been more than 30 years since Lock Up the Wolves came out. Tell us how it all happened.

“Yeah, it’s a fairy tale, isn’t it? It was 1988 and I read in the metal magazines that Craig Goldy was no longer in Dio. I was a big fan of Steve Vai at the time, and I was dreaming of getting my big break the way he got his break with Frank Zappa. My head was full of that, so I sent a demo tape to Dio’s record label.

“I made it on my Tascam four-track, and on track one I put on Last in Line, and then I soloed along to it on track two. I just did some free soloing after the song had ended. It got sent back to me with a declining letter, but a friend said, ‘Keep going!’ So I sent the tape over to the Dio fan club in LA and forgot about it for a few months. Then I got a call from Wendy Dio completely out of the blue one evening.”

So you got the gig on your lead prowess and being able to cop a classic Dio tune. Did you send a letter with the tape?

“I sent a letter with it saying how great I thought Vivian Campbell was. I was told Ronnie had put the tape off to the side because I was too young and that the gig was originally offered to Doug Aldrich, but he turned it down because he wanted to stay with his band, Lion.

“So I got an audition despite my age. That’s an interesting point you made about getting it on my lead prowess, and I think I probably did. Ronnie had said he liked my rhythm sound, but when I listen back, I don’t think that was one of my strengths then.”

Tell us about the audition process.

“They flew me over to Los Angeles and auditioned me at the Alley Rehearsal Studios in the Valley on Lankershim. Ronnie said, ‘I really want this to work,’ and he made me feel very comfortable.

“We played through Last in Line and some of the big songs. I remember looking over at Jimmy Bain on the other side of the stage; he was smiling and I thought, ‘I’m doing something right here!’ Then they auditioned me a second time, and Ronnie’s personal assistant told me [later] that I’d gotten the gig. So even before they officially told me, I got the news.”

Tell us about your first show with Dio. The pressure is on.

“We were supporting Metallica, who were touring on And Justice for All. It was such a cool time to be touring with Metallica; I love that album and I was hanging out with Kirk and Lars a lot, and they were really cool to me. The first show out, I actually felt completely relaxed and totally confident.

“The lights go down and there’s this big buildup to the opening song, Wild One, with a long intro tape being played, and then there’s a big drum fill and I run out on stage. Before the gig, my guitar tech, ‘Pops,’ had asked if I wanted him to turn my distortion pedal on and have it ready to go. I said, ‘No, I’ll do it when I get out there.’

“So I ran out there and – of course – I hit the ‘off’ switch and the whole rig went completely silent and 10,000 people started booing me! I was pretty nervous for the second show, but I got over it. Ronnie wasn’t happy after that first show, but there wasn’t any conversation and I just didn’t go near him that night. The first thing with Ronnie was you had to do your job well.

“Ronnie certainly didn’t micro-manage anybody; he hired you and you were in a band with him and he wrote the music with us as a band. If you made a mistake, he wouldn’t say anything, but you wouldn’t want to make that same mistake again. He cared about his art and his craft deeply.”

Previous: KISS: ‘Spinning Gold’ Movie on Casablanca Records Founder Neil Bogart to Screen @ Cannes – Variety Posts First Exclusive Clip – 2022
Next: W.A.S.P.’s Blackie Lawless on This is Spinal Tap, “It was not funny to me at all” – Chris Holmes – Metallica’s Cliff Burton – 2022 Interview