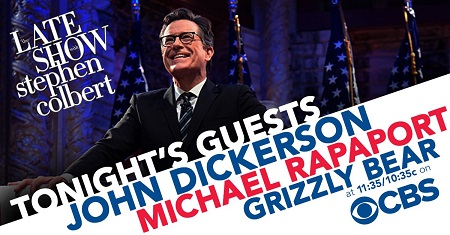 Grizzly Bear performed on The Late Show with Stephen Colbert last night (8/18/17) on CBS. The band was promoting their fifth studio album, Painted Ruins, which was released on August 18, 2017 via RCA Records. You can now watch the group perform their song, “Mourning Sound,” located below.

“We had a lot of fun making the record,” says guitarist/co-lead vocalist Daniel Rossen. “Even though there are serious themes we tried to keep the sound as light as possible. Maybe it’s a matter of being a little older and not assuming that there should be so much wrapped up in what we were doing.”

Previous: Kids React to Motley Crue then Tommy Lee Watches Their Reactions
Next: Rupert Neve Designs is Looking for a Skilled Service Tech in Texas