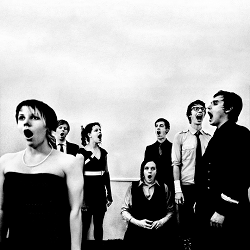 Arcade Fire (Official):  The Rebellion video is the first video we made as a band, filmed in the months before the release of Funeral. Our friend Josh Deu, who used to play in Arcade Fire, did the visual effects on the video. Somehow along the way the wrong version got uploaded and the official video only existed in a degraded form. We are happy that he was able to redo the hand drawn effects for this restoration. Enjoy the band as the babies we were!