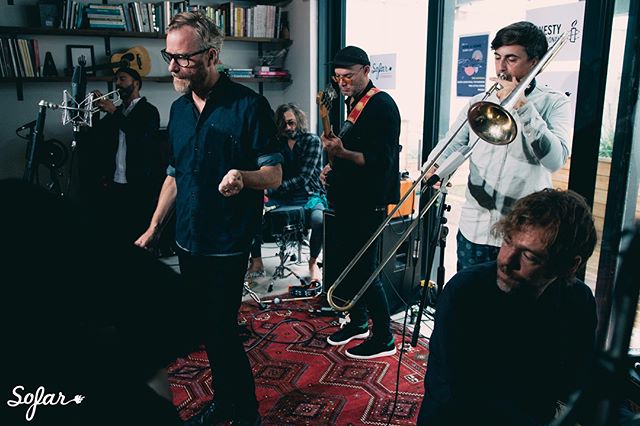 The National performed an intimate set in a picturesque Leith living room for Amnesty International & Sofar Sounds​ in aid of the refugee crisis. $180,000 was raised across the world, from Barcelona to NYC, as artists including The National, Moby, Ed Sheeran & Daughter performed in secret locations on the 20th of September 2017. Today, a video of The National performing their song, “Carin at the Liquor Store,” was uploaded and can now be viewed below. LOVE THAT SONG!

The National released their seventh studio album, Sleep Well Beast, on September 8, 2017.  The album peaked at #2 in the United States on the Billboard 200 and #1 in the UK on the Official Album Charts. The album also took the #1 spot in Canada, Ireland, Croatia and Scotland.

About Sofar Sounds
Founded in London and based… all over the place, a ‘Sofar’ is an intimate, invite-only secret performance – the best new music performed in a unique space to passionate audiences of true music fans. Imagine the best gig you’ve ever seen. Every night.

About Amnesty International
Amnesty International is a global movement of more than 7 million people who take injustice personally. We are campaigning for a world where human rights are enjoyed by all and believe that solving the global refugee crisis starts with the three words: I welcome refugees.

Where your money goes
Amnesty International is addressing the biggest challenges in the world today – inequality on the rise, ongoing crises and conflicts, those in power clamping down on people’s freedoms and more people than ever before fleeing their homes and seeking safety elsewhere. To do that, we need your help to make sure we are the first on the scene in any emerging crisis, gathering crucial evidence so we can hold governments to account. And to make sure we can provide guidance and support to refugees at all stages of their journey; to help them find a safe welcome, so they can start to rebuild their lives.

Previous: Sofi Tukker on TRL w/ NERVO & The Knocks
Next: Axl Rose, “The White House is the current US gold standard of what can be considered disgraceful.”