Gene Simmons to KISS Manager During ‘Revenge’ Album: “There’s peace in the valley that’s got to be kept. We’ve got to have a Paul song be the next song.” – 2022 Interview

VWMusic: We recently sat down with former KISS manager Larry Mazer to discuss his five-year KISS tenure. Tons of long-standing rumors put to bed. Dig it. You can read the entire interview @ this location. 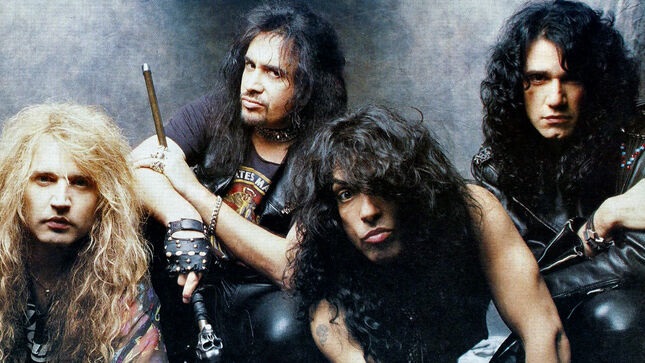 Would you say that Gene Simmons asserted himself more on Hot in the Shade?

Well, my record was Revenge, because Hot in the Shade was mostly recorded by the time I was hired. In most ways, it was already a finished record, so there’s not much I could do there. I will say that to this day, I do not think Hot in the Shade is a great record. I think there are three great songs, and the rest of it is filler. The album that I really stake my reputation on is the Revenge record because that was me forcefully putting my foot down as far as Gene coming back into the mix was concerned. I said, “Guys, if we’re going to do this and do this right, Gene needs to be upfront. We have to get heavier.” And we lead off with a Gene Simmons song for the first time since the Creatures of the Night record, and that was a Gene Simmons song called “Unholy.” We had another track in “Domino,” that I wanted to go second, but I got voted down, so “Domino” ended up being the third single. Again, my goal was to bring back the heavier side of KISS, and I think I achieved that.

As you mentioned, Revenge saw Gene Simmons positioned front and center from a musical standpoint. What went into the decision to release “Unholy” as the lead single?

I can tell you that putting “Unholy” out first got pushback from Paul, but I put my foot down and I said, “No, Paul. “Unholy” is going to be first.” I wouldn’t be swayed, and I refused to be moved off my view. I said, “Paul, you hired me to do this. This is my decision. We’re going with “Unholy” first, and that’s the end of it.” He wasn’t happy at first, but it obviously worked out.

Which track did Paul want as the lead single?

Any one of his songs. [Laughs]. I think you know the answer, because what was the second single? History shows that it was “I Just Wanna,” so there you go. That’s what Paul wanted as Revenge’s lead single. I didn’t agree with that either, I wanted to go with “Domino” as the second single. I was pushing for that, and again, Paul was not happy, even after “Unholy” had been successful, so “Domino” seemed like the obvious call. Well, Gene called me up one day, and said, “Larry, we have got to give a Paul song.” I said, “Gene, look what we just did. We rebuilt this band. We rebuilt you. We’ve got to bring it home. We have this other track in “Domino,” and it’s a great song. It’s a boogie song. It’s perfect. That’s got to be the second single.” So, Gene said, “You’ve got to trust me on this. There’s peace in the valley that’s got to be kept. We’ve got to have a Paul song be the next song.” And that’s why “I Just Wanna” was the second single, which I still don’t agree with. [Laughs].

In regard to the long-standing rumor that Eric Carr was to be fired regardless of the fact that he got sick, that’s not true?

Totally not true. It’s crazy, where do these rumors come from? This said, it’s very funny. I, unfortunately, got off on a not great foot with Eric, because when I got hired Gene, and Paul asked me to call Eric. I had already known Bruce, but I didn’t know Eric, so Paul and Gene said, “Look, you should call him, introduce yourself, and tell him you’re now our manager.” So, I called Eric, and literally, the first thing I said to him was, “I hate drum solos.” [Laughs]. So, right away, things between us were not great. Now, we got friendlier as the cycle went on, but it started off a little tense, because I told him, “I hate drum solos,” which I do. As the tour went on, we got friendlier, and we stayed friendly up until the point where he got sick. There was never a directive to fire Eric Carr from me, and again, I never sensed any tension between him and the other guys at all. I don’t know where all these rumors come from, but I thought it was a wonderful tour that was happy from beginning to end.