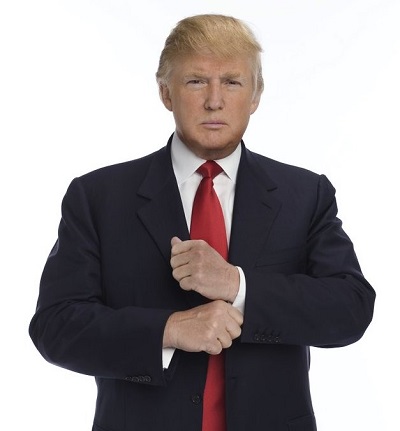 Donald John Trump, a.k.a. “The Donald,” is a well known business magnate, television personality, author and one of the most renowned real estate developers in the entire world. Born June 14th, 1946, Trump began his business career in 1968 at his father Fred Trump’s company, Elizabeth Trump & Son. He would later re-brand firm as The Trump Organization and grow it into one of the elite development companies in New York City. Trump’s success, along with the success of his television series The Apprentice, have turned Trump into a household name in the US and around the world. Trump was nearly bankrupt in the late 1980s, but rebuilt his fortune and was named one of the 400 wealthiest people in the world by Forbes in March 2014 with an estimated net worth of $3.9 billion.

Donald Trump was born in Queens, New York to mother Mary Anne Trump and father Fred Trump, a highly successful real estate developer in his own right. One of five children, Trump struggled early in his academic career until the age of 13 when his father sent him to the New York Military Academy in upstate New York. Trump refocused his energy at NYMA, earning academic honors and becoming active in varsity sports. In 1964, Trump’s third season on the NYMA varsity baseball team, he was named captain and presented with the Coach’s Award. After graduating, Donald attended Fordham University in New York City for two years before transferring to the University of Pennsylvania’s Wharton School, one of the world’s most prestigious business schools in the world.

Donald Trump earned a Bachelor of Science degree from the Wharton School in 1968, moved back to New York City and went to work for Elizabeth Trump & Son, his father’s real estate firm. One of Trump’s first projects was to revitalize a Cinncinnati, Ohio apartment complex called Swifton Village. The company had purchased the complex in 1962 for $5.7 million. When Donald was tasked with saving it, Swifton Village had only about 800 of the 1200 units rented. Trump spent about $500 million on improvements, and the occupancy rate was at 100 percent in just two years. The complex would be sold in 1972 at a profit of over $500,000.

In 1971, Donald Trump moved to Manhattan and began working on larger development projects, quickly developing a reputation with his use of unique and striking architectural designs. Once in Manhattan, Fred Trump decided to hand over the reins to Elizabeth Trump & Son, which Donald renamed The Trump Organization. Among his notable early projects under the new brand, he managed to acquire and develop the old Penn Central for $60 million with no money down and secured a 40 year tax abatement from the city for a project that converted the bankrupt Commodore Hotel into the Grand Hyatt. Of course, he also developed a habit of acquiring debt, a habit that nearly bankrupted him, both his business and personally, in the late 1980s.

Even though he was nearly bankrupt in 1991, Trump never waned in his ambitious journey for wealth. Over the next two decades, Trump amassed a vast collection of Manhattan properties, developed a number of world class hotels and casinos around the world and began developing upscale golf courses, quickly building a stellar reputation in that field as well. Trump also purchased the Miss Universe Organization in 1996 and has operated its pageants ever since, bringing NBC in as a partner in 2003. Trump would later become involved in licensing the Trump name, a business that Forbes Magazine cites as his most valuable asset.

Through his success in business, Trump gradually became one of the most recognizable names in the US. He would take advantage of this fame by becoming an author in 1987. His first book, “Trump: The Art of the Deal,” is one of the best-selling business books of all time, and has been cited as a major influence by hundreds of established business persons since. Trump has written nearly 20 books in all, including several that appeared on the New York Times Bestseller list. Donald has also hosted his own radio show since 2004, dabbled as a financial advisor, and worked with World Wrestling Entertainment.

In 2003, NBC and Donald Trump expanded their Miss Universe partnership and began airing a reality television show called The Apprentice. The show chronicled a group of contestants that competed for a high level position within The Trump Organization. Serving both as executive producer and host of the show, Donald would gather the contestants in his board room at the end of every episode and dismiss one of them with the phrase “You’re Fired.” The phrase has since become associated with Trump by the masses. The series ran for six seasons before being revamped as Celebrity Apprentice, a nearly identical format except that the contestants are celebrities and raise money for charity. Trump was given a star on the Hollywood Walk of Fame in 2007, and is one of the highest paid television personalities in the world with a per-episode salary of $3 million.

Donald Trump has had a total of five children with three women, each of whom he was married to at the time. The oldest three, daughter Ivanka and sons Donald Jr. and Eric, serve as executive vice presidents in the Trump Organization and appear regularly on Celebrity Apprentice. He married his first wife, Ivana, in 1977, and had his first three kids with her over 15 years of marriage. Ivana is also credited with coining her husband’s nickname, referring to him as “The Donald” in an interview. The marriage ended in divorce in 1992 amid a scandal when Trump had an affair with actress Marla Maples. Trump and Maples were married the following year and Donald’s fourth child, Tiffany was born just a few months later. The couple were divorced in 1999. Donald would remain single until January 2005, when he married Slovenian model Melania Knauss. Trump’s fifth child, Barron William, was born about 14 months later. The couple are still married today, and Melania makes regular appearances on Celebrity Apprentice.

Previous: DuckDuckGo Gets Boost from Apple
Next: Economy Shrank More than Reported in 1st Quarter